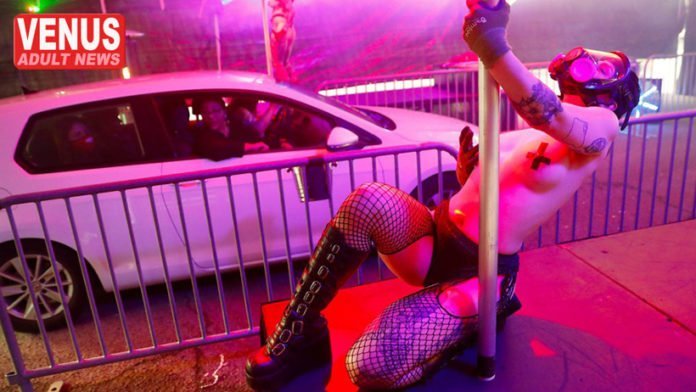 To be able to continue to offer live entertainment despite the officially imposed closures, the Portland-based strip club Lucky Devil has come up with a creative drive-in concept. The dancers perform in a drive-through tent, where the club’s food and drinks can be taken out. So the performers and staff are kept in pay and satisfied customers enjoy adult entertainment and good food.

What began as a joke on Twitter became a worldwide headline. After Shon Boulden, the operator of the Lucky Devil, a strip club in Portland, Oregon, had to close his club on March 16th due to an order by Governor Kate Brown, Boulden tried to take refuge in humor and wrote on Twitter that his performers could deliver food from now on. The unexpected viral success of his post led Boulden to put his idea into action.

As well as in other countries, restaurants were allowed to continue selling their To-Go and delivery services, the apparent focus on a delivery service or drive-in restaurant offered the opportunity to keep the club running. The special twist? The strippers perform while people are waiting in their cars for their food or at the customers’ doorstep.

Under the catchy slogans »Food 2 Go-Go« and »Boobers Delivery«, the club’s team now offers curious customers the club’s full range of services, of course with breathing protection and keeping a safe distance.

At first Boulden offered only a delivery service. For this purpose he converted the kitchen in his club and sent his dancers to deliver the food.

A short time later, the Lucky Devil erected a tent in front of the club, through which the customers slowly drive their cars while enjoying adult live shows left and right. Even music by a DJ is provided. The former bouncers now take care that the necessary safety distances are maintained.

Sending extra money to the strippers is also possible in the To-Go-Go model. However, the customers have to hold up the money, while the performers take the cash with a plastic gripper from a safe distance.

The menu is unchanged, and the performance costs 30 dollars extra. According to Boulden, the offer has also been well received because of the international press coverage. The customers accept up to 300 kilometres of travel for this special experience.

In an interview with the news agency Reuters, a customer named Dani Valdes says: »It’s a safe way to have a little fun.« Although he hopes to find similar offers in the immediate vicinity of his home, for the time being the Lucky Devil is the only adult live oasis in the USA, which has been particularly hard hit by Corona.

Boulden is optimistic and pleased about the success of his concept. However, he is still worried. At present, he only earns a sixth of his usual turnover and can only pay his employees a minimum wage.

So many of his dancers are dependent on finding other income in addition to their work for the Lucky Devil. One of them is Elle Stranger, who has been in the business for eleven years and now has to earn additional income as a webcam girl.

She says: »I miss the athletic element and also the opportunity to earn tips.« The hope that the Lucky Devil will soon be able to reopen for regular business drives everyone and bonds the team together. For the time being, however, everyone is happy that some form of normality can be sustained.