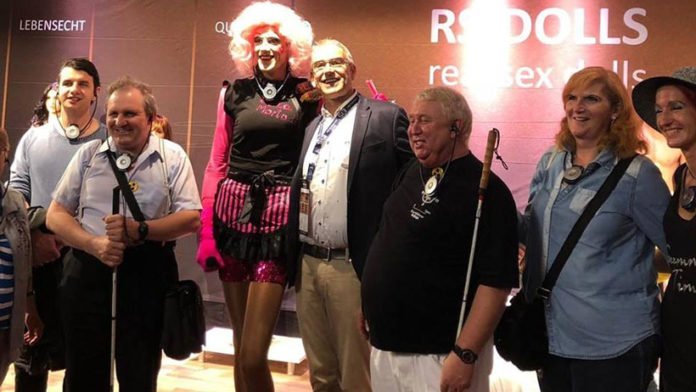 On the initiative of the Berlin blogger and music journalist Hans-Peter Sperber, a guided tour for the blind took place during this year’s VENUS. Blind and visually impaired visitors were accompanied on their tour by Drag-Queen Ella Mortadella and Youtube star and VENUS Award winner Aaron Troschke.

During the 23rd VENUS Berlin, there was a very special guided tour. For the fourth time, there was a walk to some of the most exciting booths of the fair, a tour specially designed for the blind.

The tour was developed in cooperation with the Allgemeine Blinden- und Sehbehinderten-Verein (ABSV) and was once again accompanied with humor and sensitivity by Drag Queen Ella Mortadella. This time, the Youtube and quiz show winner Aaron Troschke also took part.

After this introduction to toys, the group was introduced to the new developments in the sex doll sector. Here, too, the tour participants were able to touch the dolls and inspect the material.

In between, there were numerous opportunities to meet stars and celebrities. Besides Lena Nitro, Mariska and Mia Bitsch were also available for conversations and selfies.

In the end, the participants were thrilled and enthusiastic about the tour, so that next year the 5th guided tour for the blind is sure to take place again at the VENUS Berlin.