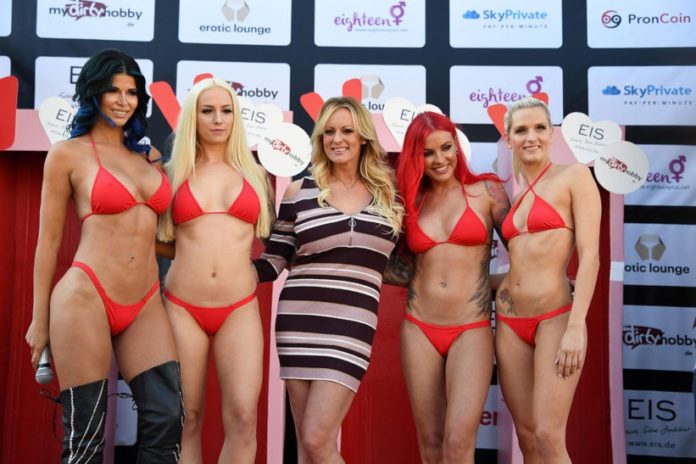 As readers of VAN know by know, Stephanie Clifford a.k.a. Stormy Daniels is this year’s special guest of VENUS Berlin, the biggest German adult entertainment fair. As always the fair is a spectacle, a loud, colorful, multi-faceted and sex-positive feast. Ms. Cliffords spent her first day at VENUS Berlin giving interviews, surrounded by security , welcoming journalists. Her temporary headquarters was the second floor of the impressive historic building hosting the stage for VENUS BERLIN. The lounge-like floor was closed to the public this year and so she had a space of her own, a small island away from the noise and yet with a lot of media intruders such as myself. We sat down for a talk. 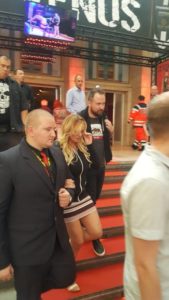 And so she was working happily as a director and writer in adult entertainment about to enjoy the fruits of more of a decade of work in the industry. But during the last three years, she has been catapulted to worldwide fame reaching politics and water cooler conversations in offices and families worldwide. She got thrown into a scandal that involved the most powerful man on earth: the President of the United States, Donald J. Trump.

She was on 60 Minutes, on Stephen Colbert and Jimmy Kimmel, she talked to seasoned journalists all over the world, she was bullied and ridiculed, revered and taken hostage from political operatives, from journalists trying to get a headline, from activists, left and right. 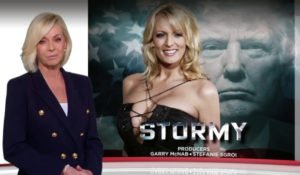 She is treated as a symbol of the Trump presidency’s affection for lies, for its disrespect of civil discourse, norms, laws, women and the truth in general. One of the problems she seems to be aware of is that even people trying to fight for her do so with political motivations, partly because they think the affiliation to a porn star is humiliating for the president. For someone who reached everything in her professional life, awards, money and recognition this must be very offensive. She oftentimes said that she had no intention of humiliating Trump, she just doesn’t want to be bullied or accept lies about what’s happened. She gives the impression of a person who won’t take the bullying, won’t give up defending the truth but who always would love nothing more than to return to her work.

VENUS: Welcome to Germany and congratulations on your book »Full Disclosure«. It’s a fun, moving and interesting read and I enjoyed it a lot. I want to start the interview a little different than the other ones as we noticed that you were referencing the famous novel »Little Women« in your memoir and you made a snarky remark that if people read your book before they read »Little Women« they should seriously contemplate their life choices. That got me wondering: What is your favorite book?

Stormy Daniels: My favorite book? You know I mention »Little Women« because you get these huge reading lists when you’re at school and that’s one of the only ones that I actually didn’t skip and really read. I liked that one. And obviously no matter how many times I read it … and I can’t stop reading it and I keep getting back to it like a beaten girlfriend is »Black Beauty«. It makes me cry every time. But pretty much anything to do with horses was my favorite. Even though every time I read it I cry… It’s terrible. [Laughing]

VENUS: Generally you seem to be a person who has a sense of appreciation for the absurdity you got yourself into. And so I was wondering what you were thinking in the very beginning when you heard that Trump would run for the presidency? What was your first impression?

Stormy Daniels: [Laughing] My first impression was that that’s not for real. And I’m pretty sure that that was everyone’s first reaction.  I wasn’t special at all at that point.

VENUS: Your life must have changed a lot. What was your goal in going public like this?

Stormy Daniels: Originally my goal was to defend myself. People were saying mean things about me and I just wanted to stand up for myself. And then that progressed to the point where in order to tell my side of the story I had to fight. I wasn’t these things that people said. Now my goal is obviously to win my court case and to have them admit that they absolutely bullied me and that the NDA [Non-Disclosure Agreement] was not legal, it never was legal. And then my goal is to buy an island and to disappear. [Laughing]

VENUS: I understand that wish. Are there a lot of threats? I noticed the need for constant security during your stay here. In which ways do they affect your daily life?

Stormy Daniels: Well there are always threats. I saw some very creative ones on social media this morning, right on my way here. But most of them come online. And people are a lot braver when they are in their mom’s basement with a keyboard. I’m pretty sure that at least 90% of the people would never say it to my face.

VENUS: You are in Germany for the first time?

Stormy Daniels: Yes, I was supposed to come once before but the schedule didn’t work out. The company that I used to work for used to come to Venus every year. I think my movies got awards here and I never got to come. So I was very excited when I was invited this year. I always wanted to come and I’m happy to be here.

VENUS: What is your impression of VENUS Berlin so far?

Stormy Daniels: I haven’t seen much yet. But I will be downstairs tomorrow signing autographs and stuff. I will get an idea then, I guess.

Stormy Daniels: As a feature writer, director and producer it’s pretty devastating from my side of the industry.  Concerning the industry as a whole, I do see that the money is going more to the performers. Girls can make more money now by camming, by filming their own clips, by producing their own content and by cutting out the producer. Which is bad for me as I am a producer. But I think for the talent it’s better. They have more control over what they want to do and what they don’t want to do and they set their own prices on sites like OnlyFans, Clips4Sale and webcamming. I miss being able to write and direct features but it’s probably better for the performers.

VENUS: What are you working on right now?

Stormy Daniels: Nothing. Which is very sad. [Laughing]

VENUS: So you are doing a world tour for the book and then you are taking a timeout?

Stormy Daniels: As soon as I’m done with the book tour I’m going back to writing and directing. Because I do miss it. I went from directing 10 movies a year to nothing.  I haven’t shot anything since June or July so I miss it.

VENUS: Thanks a lot for being here and agreeing to talk to me. Have a lot of fun at the fair!

The Interview was conducted by Christian Lux.