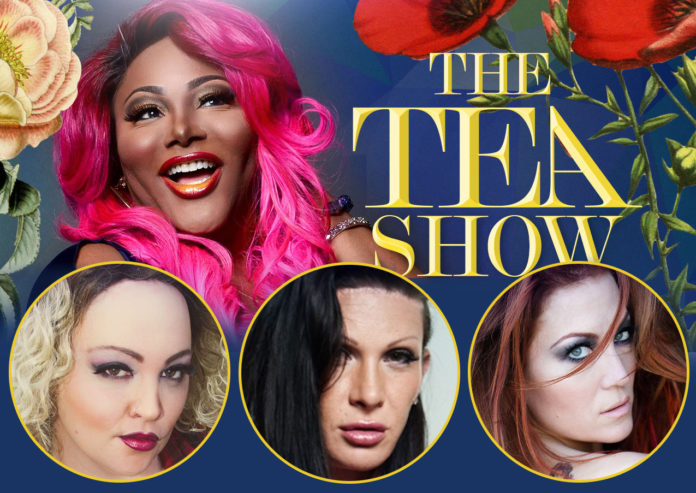 Once inside the venue, attendees could bask in each other’s presence under dimmed lights and a purple hue that gave the main ballroom an intimate, yet elegant feel. Hanging displays emblazoned with the logos of the event’s sponsors decorated the walls, glowing vividly with neon lights amidst the darkened atmosphere.

Right in the center, standing next to the fully decked bar and surrounded by gals dressed in gowns fit for the occasion, was CEO and founder Steven Grooby. Looking dapper as ever, a red handkerchief peeped from his blazer’s left pocket, accenting his sleek black suit.

When asked about the work that goes behind the scenes to produce a show such as the TEAs, he said it was a “labor of love” which sought to highlight the transgender community in times where anti-transgender political rhetoric only seemed to intensify.

“It’s very exciting to celebrate another year, especially when there’s so many things right now troubling the transgender community in adult entertainment,” he said. “Everybody out here is here to support us, you know? To get 400 people from across the world like the U.K., Japan, Canada and America together for one night is quite a unique and special thing.

“First, you’ll never get a transsexual person out before midnight,” he joked. “But we got them all out tonight! Second, to put them all in one place is just a beautiful thing.”

Off to the side, Grooby’s longtime marketing and editorial director, Kristel Penn, looked cute as a button in her black pants, white button-up and blazer. Ear piece firmly in place, she generously took a few moments from her busy scheduling and planning to give XBIZ an insight on the night’s event minutes before it kicked off into action.

“Planning for the event started, like, half a year ago since it is a three day event,” Penn disclosed. “It all culminates at this sort-of grand finale. So, I’m really, really excited but also very, very exhausted!

“You know, it used to be an online competition, and it’s expanded a little bit over the years,” she continued. “It used to be held at these little nightclubs in North Hollywood, so to be here at the historic Avalon… it really means a lot to me. Honestly, seeing everybody so happy and dressed up, it makes my heart so happy. I know it sounds cheesy, but I appreciate that everybody kinda makes the trek to come here!”

Holding a clipboard tightly to her chest, Penn also gushed about the all-inclusive vibe they hoped to generate at the night’s show.

“I think what’s cool about this show is that it feels very inclusive,” she added. “I want it to feel that way. I don’t want anyone to feel like they can’t come hang out, or can’t celebrate this part of the industry.”

Then, to signal the start of the show, the lights turned on and off and the host of the night, TS Madison, appeared behind the podium located on the right side of the stage.

The awards program, in typical fashion, got a late start and went on until about 1:30 a.m.

“We’re on trans/drag time,” TS Madison exclaimed into the microphone, urging everyone to take their seats to get the show on the road. She then disappeared, and the stage was silent until the first bars of “The Little Mermaid’s” classic song, “Part of Your World,” began to echo around the room.

All eyes were on center stage as Juanito Blanco dressed in a comical interpretation of Disney’s Sebastian the crab — with his butt cheeks on display and a hat on his head — rolled right on stage.

Then, just like last year, the ever-eccentric Hudsy Hawn took the stage to open the show, looking the part of the classic Disney character, Ariel, with her striking red hair and green skirt, mimicking a mermaid tail.

She sang several of the original lyrics before making her way across the room and changing the words to fit the night’s event and its attendees. Marching right behind her was her very own Sebastian, who tossed ping pong balls into the crowd and hugged attendees.

Once they had made it back on stage, they were replaced by four men in togas that immediately began to dance. After a minute or so, hostess TS Madison returned, donning a new green, sparkly outfit.

She was the focal point of the dance routine, with the men gyrating around her and a new male joining in to sensually grind upon her. The crowd cheered them along, and once they had concluded the routine, TS Madison took the podium yet again.

“I’m sick of these advocates who try to shame sex workers,” TS Madison explained, going into detail about the trans experience, and stating trans adult performers were responsible for introducing heterosexuals to their community. “We are the most important people in this trans struggle!”

Her introductory speech received a loud boom of applause and cheers from all angles of the ballroom. Once the clamor had settled down, she began the show by introducing the presenters of the first award of the night: Best DVD Release.

Grooby Productions’ “Real Fucking Girls,” which also won the 2017 XBIZ Award for Trans Release of the Year, kicked off the ceremony by being named the Best DVD Release. Then, Bob Maverick of BobsTGirls.com won Best Photographer.

Next up, Eddie Wood and Michelle Austin won Best Trans Man Scene for their performance in “FTM Hunter” for TSMichelle.xxx.

“We hiked all the way to Santa Monica to film this scene,” Austin exclaimed, holding the prize up high.

Best Scene Producer recipient, Damien Kane, accepted his award with his drink still firmly in his grasp, which prompted TS Madison to make a joke. She then asked for a beer, which was delivered by a stagehand.

The Best Solo Site nominees included TS Madison, who joked that “if her name wasn’t up there, she’d burn the place down.” The award, however, went to JonelleBrooks.com.

The next award, Best Internet Personality, was “near and dear” to TS Madison’s heart.

“They rob me every year,” TS Madison exclaimed into the microphone, before smacking her lips and waiting for the award winner to be announced. Tokyo native Miran took home Best Internet Personality. She appeared on stage in a striking ball gown, bedazzled with crystals.

His family accepted the award in his honor, stating that he “loved to be loved, and loved working with all of you.” He passed away in mid-December.

After a brief moment of silence, and then a roar of applause from the crowd to celebrate Gustavo, the show continued.

Natalie Mars was named Grooby Girl of the Year, and stood shyly in front of the microphone. “That was unexpected,” she said, but held the award close to her chest. “Thank you!”

Up next was the Transcendence Award, which honored an individual who “transcended further than their contemporaries.” Tori Mayes and Gia Darling took the stage to name the winner. After quirky bantering, Darling opened the envelope and announced…

The crowd erupted into laughter, but Mayes — last year’s recipient of the Transcendence Award — quickly corrected the “mistake” and announced the real winner, Stefani Special.

Right before the “halftime,” Miran was named Bob’s Tgirl of the Year.

This time, instead of TS Madison on stage, Ru Paul’s Drag Race alumni, Sonique, was the focus. Wearing a red bikini, with jewels embedded into the fabric, Sonique danced for the audience and introduced the break.

During the short interval, industry members and performers took a second to freshen up, refill their drinks and chat with peers. Stars also took this time to make impromptu photo shoots, some of them taking selfies, while others sensually climbed atop tables and posed for professional photographers.

When TS Madison returned to the stage, she had changed into another outfit — this time it was a flashy pink.

“Return your false asses back to your seat,” she instructed the audience, waiting for them to follow suit.

Best Industry Professional went to photographer Al Tom, while Shemale Stroker of the Year was a tie between girlfriends Korra Del Rio and Casey Kisses. They shared a kiss before and after receiving their award.

Next, the two Lifetime Achievement Awards went to Wendy Williams and Natassia Dreams. As they gave their acceptance speeches, montages of their best scenes and clips from interviews played behind them.

TS Madison took the stage one last time. After thanking the audience for coming out and “surviving” the evening, she invited the community up on stage so that everyone could truly celebrate together as a family.