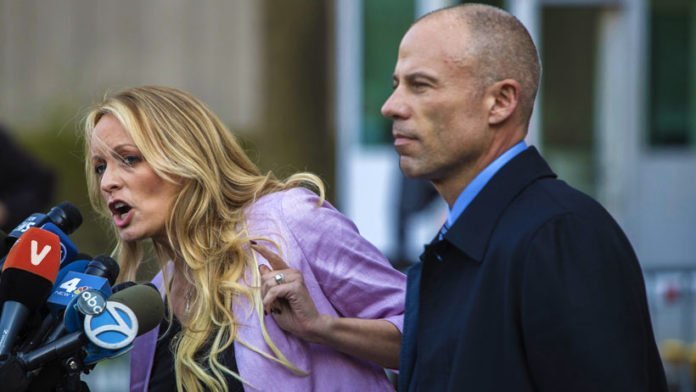 A deeper fall is hard to imagine: At the height of his media presence, Michael Avenatti, Stormy Daniel’s PR-savvy lawyer, was even rumored to be a Democratic presidential candidate. Now he is in prison. And his former client thinks: That’s where he belongs.

The relationship between Daniels and her lawyer initially seemed like a dream team in the making. With a global media campaign, Avenatti kept his client and her accusations in the media for months. Apparently, however, the attorney embezzled funds from fundraising campaigns for Daniels and from a book contract for the actress that should have gone to Stormy Daniels. At least this is what his former client, who is now represented by another lawyer, claims.

Avenatti had been charged with three different financial wrongdoings and had been released on bail during the preparation of the trial. According to CNBC, the bail agreement has now been revoked and the former star lawyer has been arrested.

First, Avenatti is alleged to have defrauded his former client of at least $300,000 from a book contract for the biography »Full Disclosure«, which Daniels presented at VENUS Berlin in 2018. Secondly, the public prosecutor’s office also accuses Avenatti of bank fraud, tax fraud and money laundering.

It is not the first time that Avenatti has had to spend time behind bars. Due to accusations by an ex-girlfriend that he had used violence against her, he was briefly detained as early as 2019, but with the help of his ex-wife and a lot of publicity work he was able to dispel doubts about his behavior towards women.

Then the shady lawyer came under criticism because he represented a questionable client who accused Bret Kavanaugh, who was nominated by Trump for the US Supreme Court, of sexual abuse. In contrast to the accusations of other women against the judge, his client seemed untrustworthy and damaged the Democrats’ attempt to prevent the appointment of the ultra-conservative judge to the Supreme Court.

Finally, Avenatti also came under criticism in 2019 because he threatened the sporting goods company Nike with a mass lawsuit and, according to the company’s testimony, blackmailed it. In California, there are now efforts to ban him from practicing his profession. The relevant bar association met last week to decide on his future as a lawyer. However, while the hearing was still in progress, Avenatti was taken into custody.

And it appears that Stormy Daniels does not seem to have any love left for her former attorney these days either. When some Twitter users tried to defend Avenatti, she interfered in the discussion and deviated from her otherwise rather diplomatic comments about Avenatti.

»Did they force him to forge my name, steal my money and lie to me? Fuck that guy!«