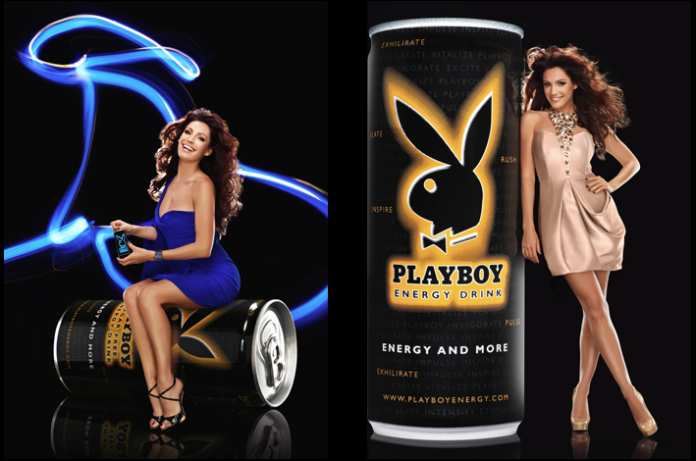 Kelly Knaub reports for Law360: »Law360, New York (June 28, 2017, 6:52 PM EDT) — An Illinois state court has tripled Playboy’s $5 million damages award, denied a bid by the maker of an energy drink bearing Playboy’s name for a new trial and granted Playboy fees and costs in a long-running trademark infringement case, bringing its winnings in the case to nearly $19 million.

Play Beverages LLC and subsidiary CirTran Beverage Corp. had asked the court for a new trial after a Cook County, Illinois, jury awarded Playboy Enterprises Inc. $5 million in damages in October, but Judge Raymond W. Mitchell denied the request in a June 23 opinion and instead granted Playboy’s bid to treble the $5 million.

The drink companies had argued that the court deprived them of a fair trial because it let Playboy pursue claims for lost royalties and counterfeiting that hadn’t previously been alleged, that it improperly let Playboy offer hearsay evidence and that some of Playboy’s evidence and testimony was prejudicial, among other things, but Judge Mitchell disagreed.

“Plaintiffs were not deprived of a fair trial for any of the reasons asserted, or based on a totality of all the issues raised,” the judge said. “The jury’s verdict was not against the manifest weight of the evidence.”

Play Beverages and CirTran had also fought for a judgment notwithstanding the verdict on the trademark infringement and breach of contract claims Playboy had brought against them and contended that Playboy’s damages should have been no more than $229,163 since Playboy failed to show evidence of lost royalties or costs related to protecting its marks. They also said the jury instructions regarding the law on trademark damages were misleading.

In addition, they argued that Playboy never sought preliminary injunctive relief in state court nor attempted to license its name and logo on another energy drink to reduce its damages, among other things.

The judge, however, leaned in Playboy’s favor by granting its request to treble the $5 million, since the jury found that the companies intentionally sold energy drinks under Playboy’s trademarks while knowing that the marks were counterfeit.

“Based on the facts before the court, there are no extenuating circumstances that would preclude trebling,” the judge said. “Thus, the jury’s $5 million verdict must be trebled.”

He added that Playboy had also sufficiently shown that the attorneys’ fees and costs it sought were reasonable and tacked on more than $2.1 million in attorneys’ fees and nearly $23,000 in costs. The total award, including the jury’s previous award of $1.6 million in royalties, now comes to nearly $19 million.

The long-running litigation began after a licensing deal between the companies expired and ultimately worked its way through bankruptcy court, federal district courts in California and Illinois, and the Chicago-area county court, according to court records.

After several of CirTran’s creditors began an involuntary bankruptcy proceeding against the company in 2011, Playboy told CirTran it was terminating the licensing deal over missed royalty payments. In response, CirTran’s distributor Play Beverages filed an adversary proceeding accusing Playboy of interfering with its sales and distribution of the drinks, but the parties agreed to drop the litigation to try to negotiate themselves, according to court records.

In the meantime, the original licensing deal expired, and Play Beverages was unable to raise the $2 million necessary to keep it alive.

CirTran and Play Beverages sued Playboy in 2012, reasserting the breach of contract allegations from the adversary proceeding, which claimed the company told them they intended to extend CirTran’s five-year licensing deal and encouraged them to sign contracts with vendors and distributors to sell the products. But Playboy actually had no intention of re-entering into the licensing agreement, CirTran claimed, as Playboy was already negotiating licensing deals with new companies.

Playboy struck back in California federal court, asking a judge to enter a preliminary injunction barring the company from selling the products after the license’s expiration. After the judge dismissed it for lack of jurisdiction, Playboy refiled in Illinois federal court.

The Illinois federal judge assigned to Playboy’s suit found the dispute should be resolved in state court, where CirTran’s suit was still pending.

In response to CirTran’s suit, Playboy brought several counterclaims, alleging it was CirTran that breached the contract and accusing the company of infringing Playboy’s trademark.

In October, the jury found in favor of Playboy on all counts brought by CirTran and on Playboy’s counterclaims in the suit. A jury agreed with Playboy that its licensing agreement with Play Beverages and CirTran Beverage had ended and awarded Playboy $5 million in damages for trademark infringement, $400,000 in statutory damages for trademark counterfeiting, and $1.6 million in royalties CirTran still owed under the licensing agreement.

Attorneys for Playboy and an attorney and media represenative for CirTran did not respond to a request for comment.