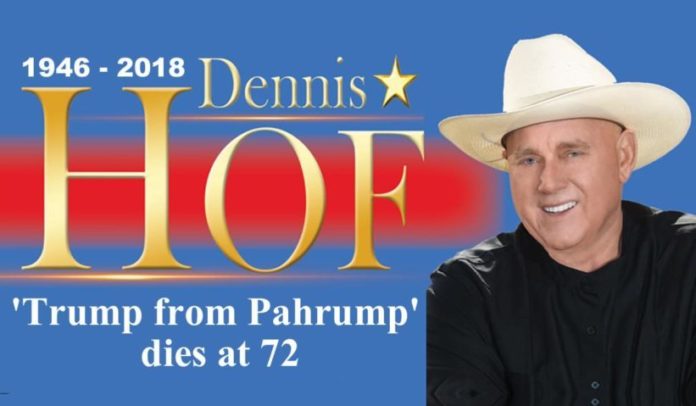 Dennis Hof, the self-proclaimed »Trump from Parumph«, who owned several legal brothels in Nevada and gained nationwide fame from reality TV has died a day after his  72nd birthday. 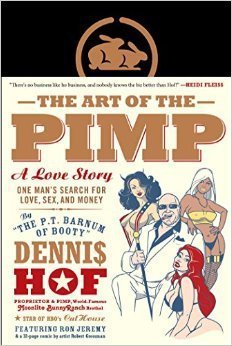 Hof made headlines all over the world with his turn to politics as a Trump-style Republican and the ensuing quarrels about the license of one of his brothels.

As aside from Nevada prostitution and brothels are illegal in the US his profession is rather rare in the US. He quickly became famous once he entered the business in 1992 when he bought the Moonlite Bunny Ranch, the first of several brothels he collected over the years. The proximity of his brothels to Las Vegas made him a wealthy and well-connected man as the city itself does not allow prostitution.

He was the star of the HBO series »Cathouse« that was running from 2005 to 2014, for the most part, filmed at the Love Ranch. He was a charismatic man with a talent for quotable oneliners. In an interview with NPR, he said about the success of one of his brothels: »We’re going to put up a sign that says over 3 million serviced or a billion served like McDonald’s.«

While he decided to run a Trump-style campaign for his attempt to win a seat at the Nevada Assembly he did allow his employees and contractors to campaign for health care and against Trump’s attempts to end Obamacare.

Other than that Hof was a Trump supporter and credited the president for his victory in the Republican primary. Hof unseated a three-term Republican incumbent, an immense  success for an outsider. He loved to compare himself to Trump directly and even wrote a book called »The Art of the Pimp«, associating himself with Trump’s bestselling »The Art of the Deal«. And like the president Hof loved to talk about himself in the 3rd person: »Dennis Hof is the Trump of Pahrump. He’s rich, he’s famous, he’s got nerves of steel. He likes hot girls.«

During his campaign Hof run into troubles with Nye County officials who closed the Love Ranch brothel because the owner had missed a deadline to file for a renewal of his license. He was able to reopen his brothel soon though, as a court ruled in his favor.

His name was already on the ballot for the upcoming elections and they were already printed and mailed out to voters so Republicans won’t be able to get another candidate taking his place. Voters will be notified though that Hof died.

His Democratic opponent, Lesia Romanov, reacted stunned and tearful in her first statement.

Heidi Fleiss who was a longtime friend of Hof and also a guest of the birthday party said: »Dennis was really excited about the future. I’m devastated about his death. I’m still in shock over it.« So far, no cause of death has been determined.

In the absence of a cause it is only natural that in these times of fake news and hyperbole politics conspiracy theories started to spread quickly after the news of Dennis Hof’s death.