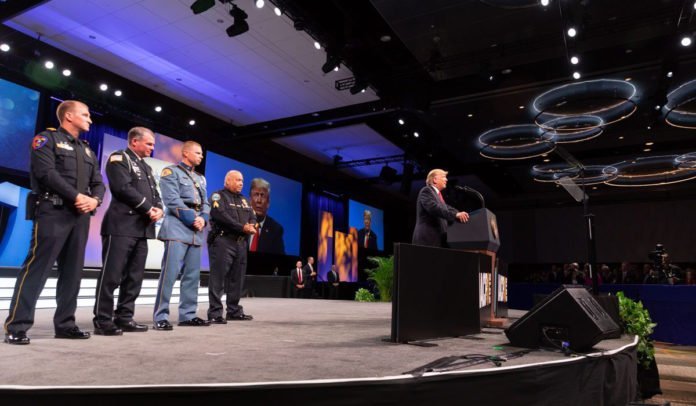 After months of battle to replace the vacant Supreme Court seat, Trump and the Republicans were able to assert themselves in the Senate against the democratic opposition. An arch-conservative judge named Brett Kavanaugh will occupy the seat of Anthony Kennedy, a politically neutral judge who thinks in a liberal way on civil rights issues. Kavanaugh was elected as the new Supreme Court judge in the Senate, despite serious allegations made by several women against the nominee, and despite the fact that the truth behind these allegations could not be fully clarified.

After Neil Gorsuch, Kavanaugh is already the second judge appointed to the Supreme Court by Donald J. Trump. Thus now five clearly right-wing oriented judges sit opposite four rather liberal judges appointed by Democrats. Many civil rights groups now fear that the country is facing a reactionary phase in which many rights such as the right to abortion, gay and lesbian marriage, affirmative action, women’s rights and countless provisions intended to guarantee sexual self-determination could be attacked or even revoked by a far-right Supreme Court.

I am responsible for the 9th U.S. Circuit Court of Appeals ruling [U.S. v. Kilbride, 584 F.3d 1240 (9th Cir. 2009)] that takes away the local community standards for prosecution of obscenity in the 9th Circuit, which are the Western states essentially, and that has served as a sort of buttress to widespread obscenity prosecutions because they’re much easier for the government to bring if they can cherry pick the conservative locations. There is a split in the court right now between the national standard in the old standard of the local communities.

Now that Kavanaugh joins Gorsuch on the court there is a majority for going back and sticking to the local community standards methodology of determining obscenity when it is charged. That is going to have a huge impact on the adult entertainment business when the case makes it up to the Supreme Court, which it will in all likelihood sometime within the next few years. I am not expecting that a national standard will survive a conservative court like the one that is currently configured, unfortunately.

Justice Kavanaugh appears to hold an expansive view of free speech rights under the First Amendment, regardless of viewpoint. That should bode well for cases involving adult entertainment, but it is impossible to know what a new associate justice will do until he or she is actually on the court.

He has ruled against the government on numerous occasions in the First Amendment context, and there is no reason to think that will change when he assumes his new role this week. That said, he has sided with the government in some close cases, so his vote should not be taken for granted.

The court has taken a right turn, to be sure, since his conservative philosophy will replace the swing vote of former Justice Kennedy. But left/right politics are not supposed to influence the kind of free speech decisions that will likely affect the adult entertainment industry.

Justice Kavanaugh is highly intelligent and well respected within the legal community for his work while serving in the U.S. Court of Appeals for the District of Columbia. He is a Republican and it is noteworthy that his original nomination to the U.S. Court of Appeals was delayed for almost three years as a result of claims that Kavanaugh was too partisan. Justice Kavanaugh has shown that he is protective of the Second Amendment [District of Columbia v. Heller, 554 U.S. 570 (2008)] and he has shown history of siding with law enforcement/government when it comes to Fourth Amendment/civil liberty issues.

The issue that the adult industry now must concern itself with is that Republicans now represent the majority of the Supreme Court and this may lead to more pro-government decisions that could hamper individual liberties.

Only time will tell how Justice Kavanaugh’s appointment affects the Court’s rulings and the industry should be actively watching, especially with SESTA/FOSTA and 18 U.S.C. § 2257 and 2257A currently being challenged (it is not beyond the realm of imagination that either of these constitutional challenges eventually find their way to the Supreme Court’s doorsteps.

The world of adult is in jeopardy as is our entire constitutional republic.

While Kavanaugh (to the best of my knowledge) has not expressed open hostility to pornography, I’m more concerned with the privacy and morality opinions he brings to the court.

I do believe there will be an attack on Roe v. Wade. It may be an outright reversal or most likely death by 1,000 small cuts such as approving state regulations designed to drive abortion out of state. I expect affirmance of state laws that are designed to be an undue burden on abortion, such as require admitting privileges (that abortion doctors can’t get) or equipment requirements (that clinics can’t afford) or approving closures where there is availability in the next state.

What people don’t understand is that the underlying issue in Roe is privacy and I see Kavanaugh as not being a protector of women’s’ (or anyone else other than corporations) privacy rights.

Similarly, I don’t believe he will uphold equal protection for the LGBTQ communities. The Lawrence v. Texas case holds that morality is not a legitimate government interest. I expect to see that element of Lawrence reversed rather quickly. And that is where the adult industry should be concerned.

Industry professionals tend to have strong opinions about net neutrality, and this dissent provides a roadmap of Associate Justice Kavanaugh’s ideology regarding that issue. [Tynan pointed to a 2017 order that offered Kavanaugh’s analysis of net neutrality in U.S. Telecom Association v. U.S. (starting on page 73).]

From the standpoint of the adult industry, nothing good can come from the installation of Justice Kavanaugh. In many areas, his vote won’t be much different than his successor, Anthony Kennedy. But from the standpoint of free speech, the change represents an unmitigated disaster. Justice Kennedy consistently was a friend of freedom of speech. I see Kavanaugh adding to the Thomas/Gorsuch/Alito, ultra-conservative team. The only hope is that Chief Justice Roberts — who now is indisputably the swing vote on issues involving individual freedom — will mellow out as did Justice John Paul Stevens (a Ford appointee who eventually came to be at the conservative end of the court’s spectrum).

Although some are concerned about Justice Kavanaugh’s religious background, as a strict constitutional constructionist and adherent to precedent, it is very likely that he will take a position of maintaining already-existing free speech protections because they are explicitly enumerated in the Constitution and elsewhere.  As we all know in the adult industry, free speech protections are the lifeblood of the business.

Not so concerned about the issue of obscenity. So far as I can tell, there are no cases in the pipeline and there are not likely to be any Supreme Court obscenity cases soon — and perhaps never will be again. That horse seems to have left the barn, maybe for good, as a result of cultural changes.

The issue that probably will come before the Supreme Court during the next two years of great importance to the adult industry will be whether laws, regulations and restrictions placed on adult entertainment, when reviewed in court for compatibility with the First Amendment, should get strict scrutiny or the looser intermediate tier scrutiny in court.

Intermediate tier scrutiny lowers the bar and increases the chances that the restrictive law will pass unscathed. Decisions routinely upholding restrictions against adult entertainment under the lighter standard have been part of the judicial hardware since the 1960s, having first emerged in Detroit’s laws that specially restricted location and zoning for adult book stores.

Whether that adult “time, place, and manner” doctrine survives has emerged at the heart of the 2257 litigation in the 3rd U.S. Circuit Court of Appeals. The 3rd Circuit has applied strict scrutiny to adult regulations — Section 2257 — and on remand, instructed the district court also to apply this rigid standard to its work.

This is the first time in at least five decades that strict scrutiny has been applied to invalidate time, place, and manner restrictions in federal courts. Judge Kavanaugh can be expected to participate in the resolution of this issue for another generation when the 2257 case finally gets to the Supreme Court.

Little in his background hints accurately toward how he will judge the issue, though one could speculate that he’d be reluctant to support overruling a decades-old doctrine. (In fact, the 3rd Circuit thought that the Supreme Court had actually done that in the Reed case involving a church sign. I’m not so sure.)

In the meantime, it would be pretty potentially dangerous not to comply with Section 2257, especially after the two most recent additions to the Supreme Court. It just might be disastrous.