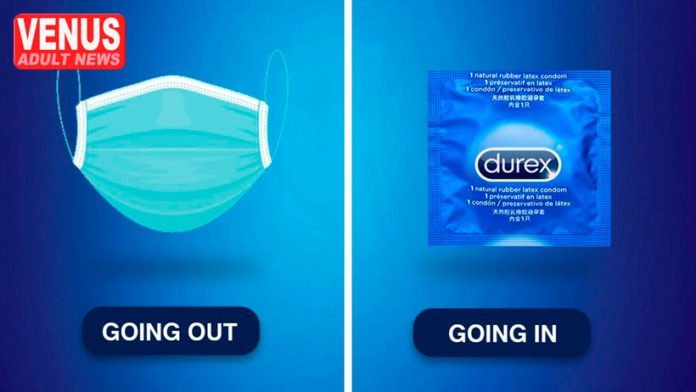 The whole world is annoyed by face masks, which for some time now have become mandatory in more and more countries. Durex meanwhile was thinking: We have been living for decades from a product that people don’t want, but which they urgently need to protect themselves. The condom manufacturer decided without further ado to launch a two-fold campaign and advertise its own condoms alongside the ever unpopular mask.

VENUS exhibitor Durex is especially known abroad for cheeky campaigns for its condoms. In India, the company regularly stokes controversy over local morals and provokes more conservative minds to the extreme.

Now the condom manufacturer is putting itself in the service of virus protection in a broader sense. Condoms protect against numerous STDs, they are an ideal contraceptive and protect against infection with the HI virus. Face masks massively reduce the risk of infecting other people with the corona virus. Wearing them enables the slow reopening of numerous areas of social, cultural and economic life.

Nevertheless, millions of people around the world don’t like wearing masks. Durex knows this, and condoms are for most people simply a necessary evil as well. From the obvious parallel, Durex’s marketing agency developed a clever campaign, which is currently circulating widely on social networks.

Durex shows a face mask on the left, a condom on the right, the mask is worn to go out, the condom to go inside. »Wear it to protect it – Going out – Going in« is the clever message. Thus, public life and sexual intercourse is relatively safe despite the danger of viruses of all kinds.

Here is a post by Durex featuring the campaign:

The campaign is popular on Twitter and Instagram. Numerous likes and positive comments speak volumes. On Reddit though – and how could it be otherwise – people were already making fun and puns. One user wrote under a picture of the campaign: »I had no problems breathing in the left one, but I almost died trying to breathe in the right one.«