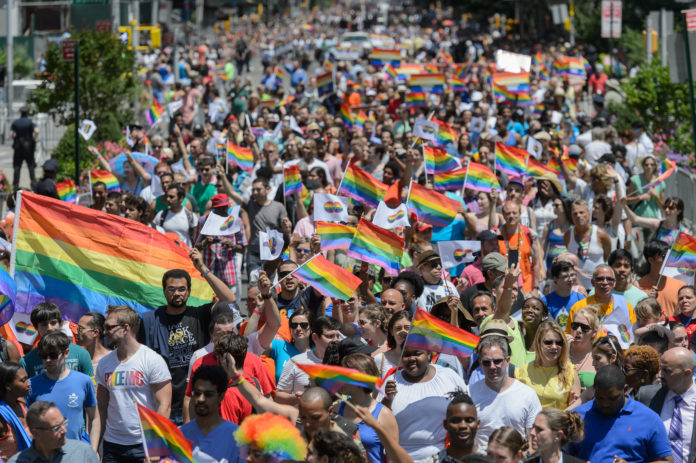 This year’s Pride Parade in New York was a stage for employees of the sex shop chain Pleasure Chest. They used it to send a clear message regarding fairness, equality, LGBTQ rights and work safety.

The chain mainly employs LGBTQ people. Last year, the workforce opted to join a union in order to renegotiate employment contracts. This happened after the employees of their competitor Babeland had also joined a trade union.

Instead of amicably reaching an agreement with its own employees, Pleasure Chest took an aggressive approach and hired a well-known law firm that represents companies against trade unions with a strategy described by experts essentially as delaying and stonewalling. Which is kind of ironic of course.

The Pride Parade 2018 was already in the shadow of the 50th anniversary of the Stonewall protests, which will take place next year and will kick-start a whole wave of public commemoration weeks. Stonewall was a pub where especially homosexuals found refuge in the 60s. When it was stormed by police forces on 28 June 1969, there was massive resistance in the morning hours: a turning point in the LGBTQ movement, which is now commemorated with Pride parades all over the world.

The Pleasure Chest employees took the parade as an opportunity to point out that LGBTQ employees often still have to work under difficult conditions today. In many countries of the world they are still threatened with persecution and/or are not adequately protected against discrimination.

The staff of the chain gathered in front of the Pleasure Chest branch in Greenwich Village and wore signs with the slogan »On Strike for Queer Rights«. The employees also announced a strike in the store and created barricades in front of the shop.

Passers-by and parade visitors were provided with flyers, customers were sent away and were also told that the shop was on strike. The employees even went so far as to recommend customers to shop at their rival Babeland, as the management there had reached an agreement with the trade union.

The strike lasted until closing time. As the Pride Parade day could certainly mean sales for the shops on the route of the parade, Pleasure Chest is unlikely to have been pleased with the employees’ action. Employees at management level were therefore trying to maintain operations in the stores and were the only ones working in the New York shops. According to the employees, the protest was supported by passers-by and customers alike.