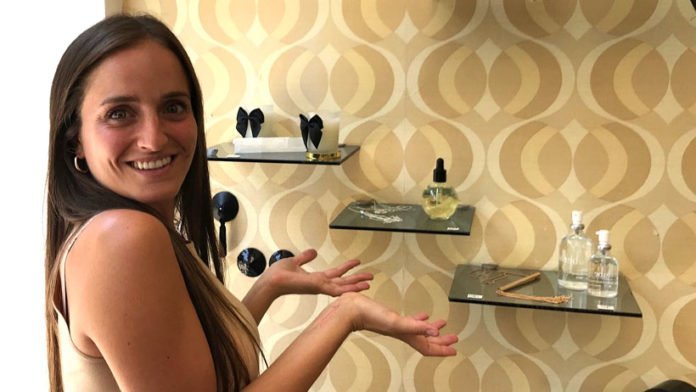 Half vintage fashion shop, half sex boutique. The daughter of rabbi and author Shmuley Boteach has opened a kosher sex shop in Tel Aviv.

With her shop for kosher sex, the 28-year-old entrepreneur continues a family tradition. Her father, the well-known Rabbi Shmuley Boteach, wrote a bestseller in 1999: »Kosher Sex: A Recipe for Passion an Intimacy«. Since then, the name Boteach has also been a brand, synonymous with the compatibility of religion and sensuality. 65,000 copies of her father’s book were sold in the first week after its publication. Over the next two decades, the family has developed several lucrative businesses based on the basic idea of teaching people kosher sex.

Shmuley Boteach gives lectures, runs an educational website and his own podcast with his daughter. The prominent rabbi works with Pamela Anderson and has been friends with the controversial comedian Roseanne Barr for years.

Intimacy and partnership at the heart of her work

For Chana Boteach, kosher sex is all about intimacy. In an interview with the Israeli daily Haaretz, she says: »Kosher Sex is really about recapturing sex and reclaiming it as what it was supposed to be initially, which is to create intimacy between two people.«

Boteach and her father derive their idea of kosher sexuality from the Jewish concept of Tikun Olam, which translates as eternal change. Behind this is also the idea of eradication of imperfection and restoration of harmony. »Sexuality has a lot to do with that. In one way, it can be the holiest thing you can do,« she says. »And it can also be degraded like we’re seeing in secular society today where sexuality is accompanied by scandal. People are associating it with pain.«

Couples of any sexual orientation welcome

Contrary to what one might think, the shop is by no means conservative in the traditional way. Boteach’s view of people and intimacy is broader. Not only married couples are welcome. »Anyone who believes in commitment and bringing love into this world and being intimate with someone and wants to learn – they’re welcome here. This applies to all couples, whether they are gay, straight or whatever.«

She refers to the Torah, in which, according to Boteach, there are problems with homosexuality, but in which there is also the provision that if one cannot keep to all commandments and rules, then one should keep as many as possible. »You do as much as you can – that’s Judaism.«

A well-mixed crowd in the shop in Tel Aviv

Despite the close cooperation with her father, however, the young sex shop operator has sometimes distanced herself from his positions. She also sees herself as a feminist and is convinced that Judaism and female sexuality are a perfect match.

Of course, not everything is as simple as it sounds. Numerous traditional, arch-conservative citizens of the city complain about her and her father. Boteach says, however, that she has been living with such criticism for twenty years and has long since been able to ignore it. But so far there has not been much criticism of her shop concept.

Boteach knows how much potential there is in her brand, and interviews show that she could imagine opening stores in the USA, for example in New York and Los Angeles. At the same time, she would maintain the concept of a combination with vintage clothing. »I think the combination became a really good concept. Customers don’t feel intimidated to walk in because no one really knows what they’re doing in here. You can take a glance at the clothes and then make your way over here and look around and ask questions.«