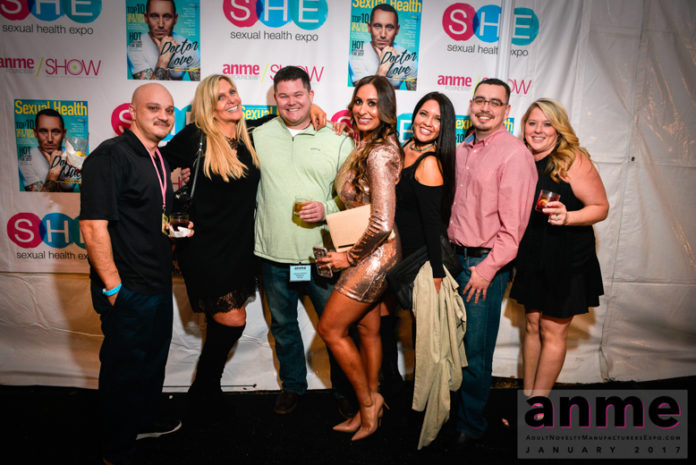 Ariana Rodriguez reports for xbiz: »The 2017 summer edition of the ANME show has come to a close, with top pleasure product manufacturers showcasing their latest and most anticipated releases for the rest of the year.

Kicking off with the XBIZ-sponsored White Party on Saturday evening, ANME’s show floor opened on Sunday morning and welcomed international buyers with a wide range of products to fulfill any niche in adult retail. ANME’s three exhibition areas captured the expansive range of the pleasure products market, showcasing everything from sexy lingerie to innovative toys and kinky adult products.

On the third and final day of the show, Nasstoys Sales and Marketing Director Kathryn Hartman told XBIZ that the company was still anticipating a busy day as the show winds down.

“It always happens; buyers wait until the last day to place their orders,” she said. “We’ve been busy every day — standing room only. I’m grateful that this time we came with an expanded staff that now includes Christina Crespo, who is our new Spanish-speaking salesperson; and the return of Taylor Means to the Nasstoys sales team.”

Showcasing a variety of pleasure products, Hartman says that the company’s most successful debut at the show was the release of Touch — a vibe that activates upon contact with one’s body. It features 10 functions and is USB-rechargeable.

According to Grossman, CalExotics released its new Tiny Teasers line following a request from customers for petite rechargeable vibes. “All of the Tiny Teasers retail for under $24,” Grossman said.

Another new collection for CalExotics is the Eden line that comes in packaging with a tropical look. The Eden line features four styles and retails for under $40.

New Vac-U-Lock items include the Extreme Set and even a new attachment that  makes a household drill Vac-U-Lock compatible, allowing users to turn the tool into a sex toy.

Doc Johnson also released a new edition of its School of Doc educational materials, which is now featured in a booklet called “School of Doc Vol. 1.”

“Icicles is always a bestseller and the interest in the line continues to grow,” Pipedream Products’ Molly Murphy said.

Pipedream also introduced The Bigger Bang, a small, portable sex machine that thrusts and rotates. It is dubbed “The most advanced sex machine ever made.” According to Murphy, it has a wholesale price of $200.

Other new releases include the Fuck Me Silly Man, which offers “20 pounds of pure man” and new additions to the popular King Cock line, which includes styles in a new tan color and new smaller realistic dongs called Stiffies.

Topco Sales presented the CyberSkin Elite Jackhammer Vibrating Pussy & Ass front and center at its booth at ANME. The lifelike masturbator offers a grip and tag action, heats up to 98.6 degrees and vibrates at six speeds. It also features a wired controller and comes with a water jet for cleaning.

The company also released new additions to its Penthouse, CyberSkin and Climax collections.

Jopen released the Amour line if soft pink-colored vibes. Each of the vibes are covered in satin finish silicone and feature a heart-shaped based. The Amour Remote Bullet features a heart-shaped cordless controller. Amour toys are packaged in an envelope-shaped box.

According to Jimmyjane’s Molly Murphy, because of the line’s mainstream appeal, Jimmyjane is anticipating success for the EVOKE line.

Jimmyjane’s LOVE PODS are designed for clitoral stimulation and were designed based on the success of the Form 2. Each LOVE PODS charges on a dock similar to Jimmyjane’s Form 2.

Classic Erotica exhibited in a new booth, and a new location near the entrance of the main exhibition area of ANME. According to Classic Erotica’s Nicole McCree, the new location created more traffic for the manufacturer of sensual body care products.

Among Classic Erotica’s new releases was a re-branded version of the Coochy line, which has dropped the Body Boudoir brand.

“We currently offer a Love fragrance collection so this line is like its alter ego,” McCree said, describing the scent as heavy and potent. The Lust collection also includes a gift set that comes with a chic keychain that can double as a sensual tickler.

“When stores put this display in their stores, they will immediately see a 30 percent rise in sales,” Dennis Paradise said. “It’s something that little stores can do that big box stores can’t.”

Xgen Products showcased its soon-to-be-released Frederick’s of Hollywood collection for which it has the exclusive worldwide rights and distribution. According to Xgen Products President Andy Green, the line is set begin shipping in five weeks.

Xgen’s biggest debut was its expansion of the Zolo collection of masturbators, which now includes vibrating strokers and “deluxe” masturbators with silicone rings for a customizable experience. Zolo also added the Blow Pro — an automated stroker, which comes to retailers with a testing unit for display. Green said Zolo will also continue to offer its disposable strokers, the Zolo Cup and Pocket Pool.

New couples kits have been added to the Bodywand range, including the seven-piece Glow in the Dark Card Game set and a five-piece Tickle, Tease & Please Card Game.

The Screaming O showcased its upcoming fall releases, which includes the Affordable Rechargeable moove — an item that the company is especially excited about, Screaming O Marketing Manager Gideon Perez said.

“We’re continuing to expand our Charged line to offer consumers an affordable option that is still luxurious,” he said.

The Charged collection now includes Charged Combo Kit, as well as rechargeable My Secret Vibrating Panties, including a new version for men called My Secret Screaming O for Him. Screaming O also released new accessories such as the replacement charging cable.

Sportsheets introduced a revamped, repackaged and expanded version of its Sex in the Shower line, which according to Sportsheets founder Tom Stewart, is eight years old.

“We came out with 18 products in the line — seven of them are bestsellers,” he said. “We wanted to give the line a more feminine, spa-like look.”

Among the new additions to the Sex in the Shower line is the gel lube that won’t wash away during intimate play in the shower. The collection also has added several toys like vibes, a butt plug and shower-friendly cuffs.

“The shower is a good place for couples to experiment,” Stewart said. “With Sex in the Shower, we’re providing the context for more couples to explore.”

Channel 1 Releasing debuted the latest reinvention of the Skwert. The Boneyard-branded and patented nozzle — also available as an anytime-anywhere douche — is now offered as a lube injector.

“Skwert is a bestseller — it sells like crazy,” Channel 1 Releasing Retail Sales Specialist Kim Airs said. “We are super excited about the release of the new lube injector; we are expecting to start shipping it in mid-August.”

The Rascal/Boneyard Toys booth also showcased the brand’s first paddle, which is made of 100 percent silicone. It’s lined with raised skulls on both sides of the paddle and features a collectible Day of the Dead skull key chain.

ANME returns to the Los Angeles Marriott Burbank Airport hotel in 2018 on Jan. 8-9.