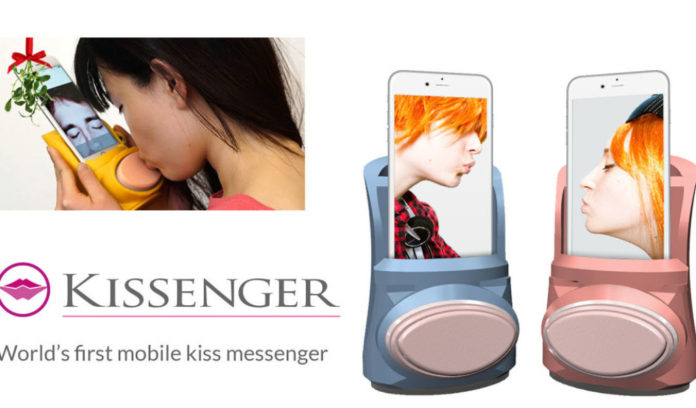 First, let’s take care of the name: “Kissenger,” the in-development interface gadget that will allow a person to send or receive a (semi)-realistic kiss from another, has nothing to do with Henry Kissinger (spelt with an “i”). Rather, the word is a combination of “kiss” and “messenger”—so don’t be confused.

Next, Kissenger is hardly the first time anyone’s tried to create human/machine sexual interaction. Even back in the ’90s, people were speculating about a body suit fitted with tiny motors and vibrators that would allow a person half a world away to stimulate the wearer over the internet.

Beginning in 2009 and ending only recently, there was the RealTouch from AEBN, which delivered penile stimulation in synchrony with the sexual actions taking place on a specially encoded videotape or DVD. A more basic version of that was brought to market by Lovense, whose iMan and iLady could transmit sexual interaction between them, with LovePalz in 2011 going them one better with its Zeus and Hera, allowing even better interaction. More recently, Kiiroo.com has come out with the latest in teledildonics: its interactive Onyx (for men) and Pearl (for women), which “are capable of sending and receiving tactile sensory data, and responding to data received.”

By those lights, Kissenger may seem a bit primitive, but when it’s finally ready for the market, it will allow realistic kissing over a mobile phone. According to the device’s website, “High precision force sensors are embedded under the silicon lip to measure the dynamic forces at different parts of your lips during a kiss. The device sends this data to your phone, which transmits it [via an app] to your partner over the Internet in real time. Miniature linear actuators are used to reproduce these forces on your partner’s lips, creating a realistic kissing sensation.”

“As with any communication technology, the project is also about collecting data,” noted journalist Rhett Jones on the Gizmodo.com website. “Researchers will record statistics about blood pressure and heart rate in lab tests to see if users can be affected in the same way that they are by a real kiss. And eventually, Kissinger’s creators hope to pass the Turing test. Will lab subjects be able to tell the difference between a kiss from a person and a kiss from a computer simulation?”

Also in the works: Incorporating tongues into the kissing.

The device, pictured above, was invented by Emma Yann Zhang as part of her Ph.D. project, and although a wired prototype has been successfully tested, a saleable version is reportedly months if not years away—but hey: Science marches on!

(Note: This Kissenger should not be confused with a device of the same name from the Singapore-based Lovotics that’s currently seeking development funds through IndieGoGo here.)