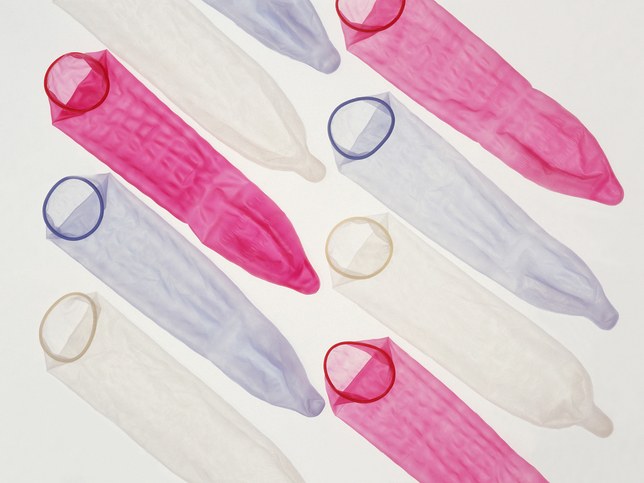 Suzannah Weiss for Glamour: »I don’t plan on getting pregnant anytime soon, and since I split my time between different countries, any birth control method requiring a prescription sounds way too complicated. So for me, it’s condoms. I’ve always viewed them as a necessary evil—well, annoyance is probably the better term. Most of them have some sort of band at the bottom that hurts when it makes contact with me, the material chafes my skin, and sometimes I feel like I’m having sex with latex instead of a person. If we can make remote-controlled sex toys and sex robots that talk to their owners, are we really OK accepting that condoms have reached their peak technological potential?

To be fair, condoms have come a long way since they were made from linens in ancient Egypt and animal bladders or intestines in ancient Rome. But even historically, condom advances have been remarkably slow: When they were first widely sold, in the eighteenth century, they were still made of linen and animal parts. It wasn’t until the nineteenth century that people outside the upper class began using them. At that point, they could be mass-produced, which made them cheaper, and rubber ones started to pop up. Finally, we got latex in the 1920s, and we’ve pretty much been using the same stuff for the past 100 years—with the occasional addition of lube and some odd flavors.

But it’s more than just time for a change. When people don’t like the feel of condoms, they often won’t use them at all—putting themselves and their partners at risk for STIs. According to the National Survey of Sexual Health and Behavior, women ages 25–34 say they’ve only been using condoms 24 percent of the time on average. In one study in the New England Journal of Medicine, 41 percent of people said they feel that condoms make sex less pleasurable.

Davin Wedel, president of ONE Condoms’ parent company Global Protection Corp, says the most common complaints he hears about condoms are that they don’t fit and they’re uncomfortable. People tend to view condoms as “a necessary nuisance, an obstacle that has to be tolerated,” agrees Stuart Nugent, brand communications manager for the sex toy company LELO. Perhaps that’s in part why STI rates have hit an all-time high in the U.S.

Recognizing this problem, some condom companies are striving to innovate. Alexis Thomas, owner of Taboo Tabou—a sex shop in Chicago that started off as a condom shop—says the most advanced options we have right now are LELO’s HEX condoms, which are .045 mm thin and consist of 350 interconnected hexagons that let your bodies transmit warmth to each other’s; and ONE Condoms’ Pleasure Plus condoms, which have ribbed pouches built to stimulate nerve endings.

Eager to see if the technology was really there, I tried both HEX and Pleasure Plus. The results were just OK. Yes, they caused less chafing than the other brands I normally tolerate and had less noticeable bands at the bottom, but I was still very much aware that I was making contact with a condom, not my partner’s penis. In fact, my partner didn’t notice a difference between these and our usual brands at all.

Wedel is well aware we have a long way to go before people feel that condoms don’t detract from sex. “Condoms are intrinsically a barrier method. And what people want and love is not to have any barrier during sex,” he says. “It’s a delicate balance between comfort and safety.” And unfortunately, those two features don’t tend to go hand in hand, says Nugent: The thicker the latex, the safer the condoms…and the less you can feel of your partner. ONE Condoms’ pouches and LELO’s hexagons have made superthin condoms safer, but a condom can only be so thin before it’s just going to break.

Even Bill Gates has recognized this fundamental problem in the design of condoms and the role it might play in discouraging safe sex. In 2013, he challenged the world to create a “next-generation condom” that would “significantly preserve or enhance pleasure.” He awarded $100,000 to 11 finalists, whose inventions ranged from cow-tendon condoms to handled ones. The teams have been working on these, but none have actually hit the market yet.

“It comes down to money, and the amount the consumer is willing to spend is far too little to justify making [the Bill Gates winners’ inventions] and manufacturing them,” says Thomas. And even if new condoms do get made, there’s typically a long wait to get FDA approval. Not to mention, it’s expensive. “We’ve spent millions of dollars in laboratory and field testing to meet both FDA and ASTM guidelines,” says Wedel.

If you’re using a totally new material, cost becomes even more of a problem. Non-latex condoms have their own expensive approval process that often takes years. Nugent thinks we might start to move beyond latex once condoms made of materials like graphene, carbon nanotubes, self-healing polymers, and aerogels become commercially available. But, he says, we likely won’t see that happen for another 20 years.

Still, there’s one common problem with condoms that could be more immediately solvable: the fact that they tend to come in just a few sizes and one shape, while penises come in infinite shapes and sizes. Wedel’s hoping ONE Condoms’ myONE Perfect Fit condoms, which come in 56 sizes, can help solve this.

We as consumers could also benefit from getting out of the one-size-fits-all mentality we apply to condoms, says Thomas. The first option we see on drugstore shelves isn’t always going to work for us, so if we want to find condoms that feel better, we have to shop around. “There are really great products out there, but there isn’t enough education or information on how to find the right one for you and your partner,” Thomas says.

So for now, maybe the most promising (and least costly) way forward is not more advanced technology but more thorough education. Just a few minutes of research, after all, did improve my sex life. It’s still not quite condom-free sex, but it feels like a big step forward.