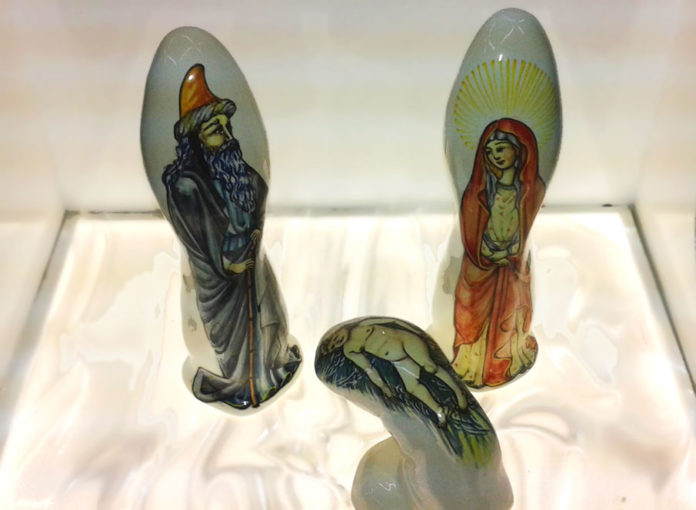 THE owner of the a Toledo sex shop has decided to reassemble his controversial nativity scene, which features sex toys representing the Virgin Mary, Joseph, and the Baby Jesus.

The figures are the work of local sculptor Ernesto Yáñez and were recently put on display in the window of the Non Sit Peccatum sex shop in Talavera de la Reina. They quickly sparked an outcry in the community, which ultimately led shop-owner Hector Valdivielso to take the issue to a public vote. He posted the question online and asked people to provide their opinion about the naughty nativity scene: should it stay or should it go? The results are now in, and after 988 votes, 78.5 per cent of respondents have voted in favour of bringing the display back.

Valdivielso said in a statement that the shop has received a great deal of support,  not only from clients but also from residents of the community in general. He also acknowledged that some people were extremely vocal in their criticisms of the nativity scene. Last week, his shop was the target of graffiti, insults, and threats.

One man reportedly went into the shop, expressed his disdain for the figures, and then asked permission to pray.

“He placed himself in a corner of the shop and for 20 minutes he was praying. Standing there, with one hand over the other on his chest. The people who came in were freaking out,” claimed Valdivielso.

Valdivielso also said that several other customers soon complained, with one person stating that if someone else didn’t take the display down, he would do it himself.

This man then began a campaign to do something about the display. He wrote messages on Facebook in which he claimed that the nativity scene was disrespectful and “shameless.” He also complained to the police and encouraged others in the village to join him in his protest.

According to Valdivielso, the man later returned to the shop and insulted and shouted at him, and then came back again with a group of more than a dozen people. Valdivieso eventually lodged a complaint against the man with the police.

Valdivieso has argued that the shop is located at the very end of a passage and that it is unlikely that people would pass by accidentally. He also claimed that last year, he erected several similar figures and no one said anything.