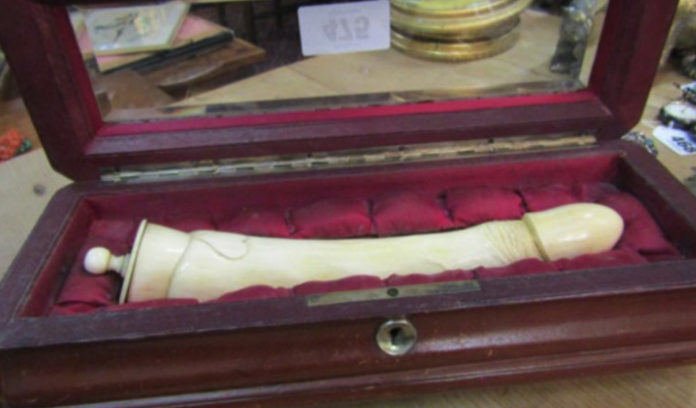 But, thanks to an auction this weekend at Matthews Auctioneers in Oldcastle, Co Meath, Ireland, that rare item will be up for bid.

“A family member found it in a drawer, and he put it in the auction for fun really,” auctioneer Damien Matthews told the newspaper. “We believe the ivory dates back to the 1840s. This fellow, the original owner, was in India in the 1840s, where he shot himself an elephant, and brought the tusk home.”

It’s believed the tusk was later carved into a pleasure object in China around the turn of the century. There’s a heart carved into the ivory at the base of the object, and a small pocket of space where the wife could keep a lock of her husband’s hair. The custom-made storage box was made in Ireland.

Matthews said the piece would have been a true luxury item for its time, and is a “great rarity.”

“I’ve been at this 25 years and I’ve never seen anything like it. You do get the Victorian era massagers every so often that come up for auction, but nothing like this,” Matthews told the Irish Times. “You’ve got to remember in Victorian times, the amount of people that could afford to indulge or create something like this was tiny. Ninety nine percent of the country were trying to get by, so there were perhaps 400 or 500 families in the country with those kind of means. It’s not just a piece of erotica—it’s a work of art, and a fascinating piece of social history.”