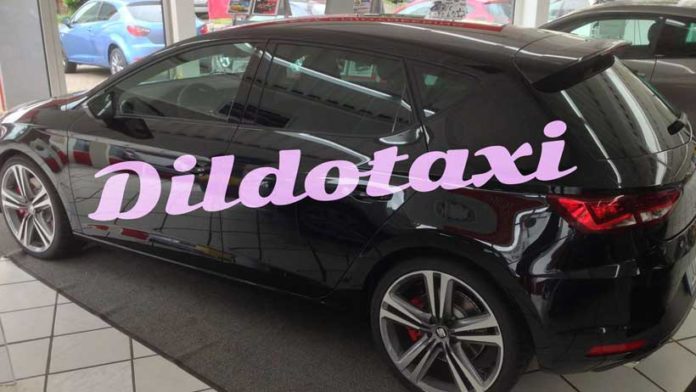 Silke Heimsoth runs the sex shop »Pussy Pleasure« in Duisburg. Like many other retailers, she had to close her shop during the nationwide lockdown at least until April 19. A painful loss in revenue, which the entrepreneur, like many people these days, initially met with dark humor online.

As a joke, she posted a photo mock-up on the Facebook page of her shop showing a car with the inscription »Dildo-Taxi«. Commenting on it today, she said, »I wanted something funny at that time.«

The store owner was surprised by the reaction to her joke. Many followers of her account took the joke at face value. Numerous Duisburg residents called the entrepreneur and wanted to receive sex toys by direct delivery. An announcement in the widely read regional newspaper WAZ generated additional demand. Heimsoth was overwhelmed with inquiries.

As a true businesswoman, she realized that she had unintentionally discovered a niche in the market and quickly put her little joke into action. Now she actually drives to her customers with her car and delivers sex toys, lubricants and other pleasure products.

However, her car does not bear the flashy inscription »Dildo-Taxi«. After all, the customers usually want to be served anonymously and don’t want to show the whole neighborhood how they decided to spend their quarantine time. Thus, »Pussy Pleasure« can continue to generate sales, while other retailers don’t know how to survive the month of April.

Here you can find the website of Pussy Pleasure.