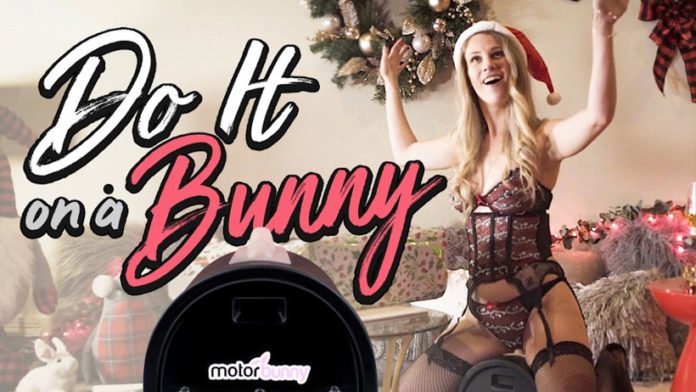 The latest installment of the popular YouTube series »Do It On A Bunny« by the multiple VENUS exhibitor Motorbunny is dedicated to festive activities: Lorrae Bradbury, founder of the sex dating site SluttyGirlProblems.com, tries to wrap her Christmas presents while sitting on the toy, which is modeled after a saddle.

In order to circumvent the censorship regulations of the major social media platforms and still be able to advertise for products of the sex toy industry, manufacturers and retailers often have to be very creative. How can you advertise properly if the actual benefit of a product cannot be shown?

Motorbunny solves this problem in a playful and provocative way. After all, the benefits of the sextoy are certainly shown in its YouTube videos. Nevertheless, the funny little films are not to be objected to: The toys are shown in action and with their effect on humans, but there is no nudity whatsoever. Instead, however, all the more humor and joie de vivre.

In the Christmas episode of the series »Do It On A Bunny«, Lorrae Bradbury dressed in festive lingerie and wearing a Santa hat attempts to wrap her presents while sitting on the sex toy saddle, aroused and stimulated by the vibration of the Motorbunny.

Of course, this is not easy for her as the toy leads the pretty blonde forcefully close to an uncontrollable orgasm. A representative of the manufacturer says: »While it definitely won’t make it easier, riding the power-vibe Motorbunny while wrapping gifts looks like a whole lot of fun.«

Craig Mewbourne, the founder of the US manufacturer, also comments on the new video: »Receiving gifts has always been more fun than wrapping them — until now. Lorrae is hilarious, and we are so lucky to have her for Do It On a Bunny.«

Meanwhile, the hilarious web series has 14 episodes featuring models in different life situations doing a job while sitting on the Motorbunny and inevitably drifting towards an orgasm.

More information about Motorbunny can be found here. Lorrae Bradbury’s website SluttyGirlProblems is also worth a visit.

Here the clip in its entirety:

Additional episodes of the series can be found on the YouTube-channel run by Motorbunny.