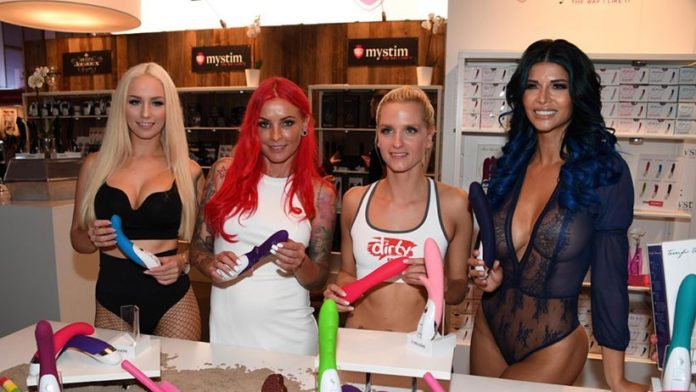 At this year’s VENUS Berlin, the increasing diversification of the sex toy industry was particularly noticeable. More and more special toys for big and small wallets, mainstream and niche fetishes, sex toys for the design conscious and app-controlled innovations for techies are coming onto the market more and more. For today’s issue of the interview series with exhibitors from VENUS Berlin, we spoke with Mystim, a specialist for electrostimulation from Germany.

One of the major niche specialists from Germany is the manufacturer Mystim. It was originally founded in Mömbris and is a global market leader in the field of electrostimulation. The company was founded as a spin-off from a medical technology company specializing in electrical stimulation devices for therapeutic purposes. Christoph Hofmann, the co-founder of the medical company, recognized that electric stimulation had enormous potential in the sex toy market and founded Mystim.

Although there had been a strong fan base for electrosex before, this was mostly restricted to the field of SM practices and remained for many people unknown territory. Together with Jessica Hofman, Christoph Hofmann developed their company into a global brand. The two were awarded the Sparkasse Aschaffenburg-Alzenau Founders’ Prize in 2016.

The majority of the company’s product range is in the premium and high-price segment. Since 2009, Joujoux has been introduced as a second brand, through which the company also offers intimate jewelry, massage candles and other accessories.

While in the beginning the products were mostly made of metal, in 2011 Mystim was also able to launch electric toys with conductive silicone, a breakthrough for the increasingly design-conscious industry. Additional devices required to generate the electricity are often no longer necessary. The company now also offers products that work in their own right as electric toys and do not require any peripheral devices.

As one of the few sex toy manufacturers, the company does not produce in China but focuses entirely on domestic production in Germany. Although this is expensive, it pays off, says Jessica Hofmann, also Managing Director of Mystim. More than 20 industry awards speak for themselves.

At the booth of Mystim, we were able to talk to her about Germany’s hidden champion, who had to move from Mömbris to Alzenau in 2016 due to the immense growth of the company.

VENUS: We are at the booth of Mystim, a sex toy company that has gained worldwide fame for its electrostimulation sex toys. What are your main products? And how do your products work?

Jessica Hofmann: Of course, our flagship product is electrostimulation. Our toys transmit electrical impulses to the skin. Of course, electricity always sounds a bit dangerous at first. But it is completely natural because electric stimulation does nothing else than our body does, it also communicates via electrical impulses, which are transported to the brain via the nerves. Since there is no need to translate the sensation into impulses, because stimulation current is already the required impulse, stimulation current is the most intensive form of stimulation there is.

VENUS: What’s new at the fair?

We also have a funny new product in the range. A masturbator, we also call it »Möschen im Döschen«, a disposable masturbator that is packaged in a can.

Standalone products on the rise

The company’s history and Mystim’s presence at VENUS

VENUS: When was the company founded and how are you organized?

Jessica Hofmann: Okay, a few quick key points: We produce our products in Aschaffenburg, but we are active worldwide and have distribution networks in all markets. We deliver to distributors all over Europe, as well as to Russia. We have our own warehouse in the USA and have basically covered all distribution channels. However, we still sell directly through our website. Mystim has about 20 employees. We were founded in 2005.

VENUS: So Mystim was essentially created during the first wave of the revolution in the sex toy market?

Jessica Hofmann: Sort of, yes. When the first real brands emerged within the industry. Before that, there was only cheap stuff from China and cheap materials. At that time, there was already Fun Factory in Germany, but otherwise no real brands, that’s true.

VENUS: What do you think about this year’s VENUS Berlin?

Jessica Hofmann: It’s still Friday, and the really busy days at VENUS are yet to come, but we’re already very satisfied with Thursday and Friday morning. It’s going well, which wasn’t to be expected given the weather. We are pleasantly surprised regarding the first days. Traditionally, it’s especially on Sundays when so many couples come, looking for products and things they can integrate into their lovemaking. Saturday is more the day for the party people, groups of men looking at the girls.

VENUS: Thanks for the interview.

If you want to know more about the electrosex-pioneer click here.