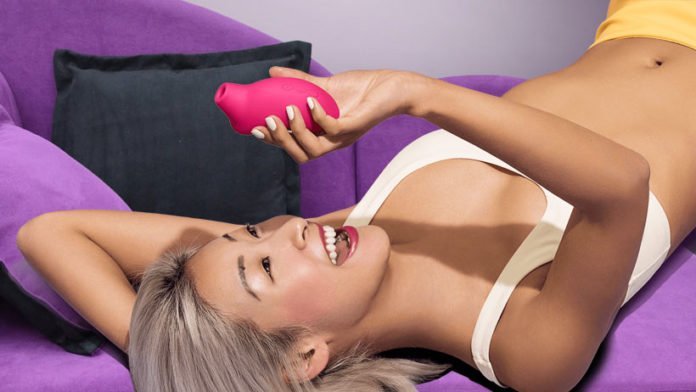 LELO has developed a completely new booth concept for the VENUS Berlin 2018. Everything there invited you to play and have fun. At the center was a large Formula 1 racing car in which you could get in and play a computer racing game on the screen. A few meters further on, rings were thrown between stylishly packed condom packages. The winners won the relatively expensive ultra-thin condoms of the LELO brand HEX. On the back of the booth, there were stools, a small cinema presented a promotional film for a new stroker that is coming onto the market these days.

The LELO masturbator is also the real reason for the audience-friendly, multifaceted game-oriented booth. For the first time, the premium manufacturer is penetrating the men’s toy market vigorously. For this, the company believes, it needs a new way of addressing the target group. 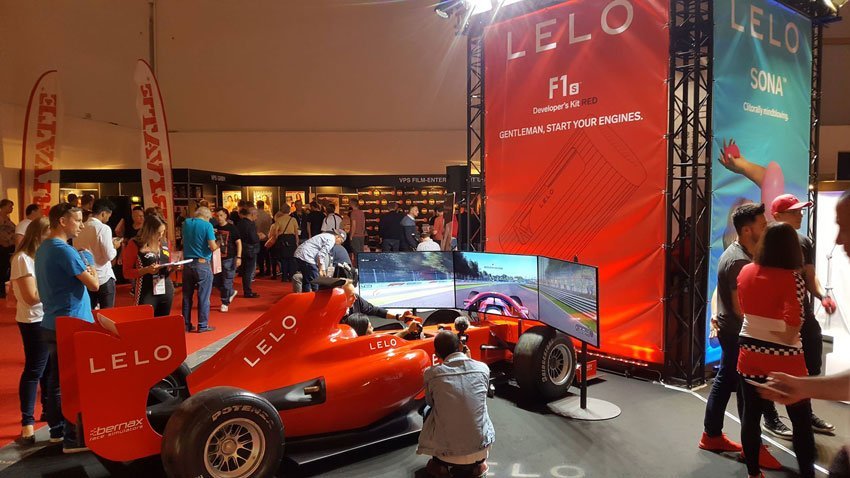 VENUS: This year you’ve opted for a very different booth concept than before. Can you give us a short overview? Why the switch from a quiet booth setup based on design and discussions to an adventure park with gaming elements?

Svenja Schön: The reason for the change is that at this year’s VENUS we are presenting a completely new toy, a masturbator for men. And since men like to play and compete, we now have this racing car, a driving simulator at our booth. And also the ring throwing game. That’s what it’s all about.

VENUS: People are regularly gathering at the booth. So the concept is attracting people. Does it work for you?

Svenja Schön: Really good. There are many men who want to drive and play here. But that’s also because we’ve designed the racing game area in such a way that you just have fun there. Nobody forces a product tour on you, you can just play.  Get in, drive off, have fun.

Thanks to an innovative hexagonal structure, LELO offers ultra-thin condoms

VENUS: The ring throwing game is about a different business segment at LELO. What many people still don’t know, at least in Germany, is that LELO also makes condoms. This is another area where you are active in a high-end segment. What is different about your condoms?

Svenja Schön: For us, everything is about innovations. And the last innovation in the condom industry was 70 years ago. And it is just the case that sexually infectious diseases have increased again in recent years. Many people just say: I don’t want to use a rubber. It doesn’t fit … or it doesn’t hold properly … It is uncomfortable … And the other reason often cited by condom resisters is the lack of bodily closeness, you can’t feel the other person properly.

LELO has tackled these two problems. We launched the new HEX condom in 2016. However, work on the new condom had already begun seven years earlier. LELO has thought about what you have to change about the condom structure so that people actually enjoy using rubbers, so that it is no longer a necessary evil, but a normal use and perhaps even a lifestyle object. Something I like to have with me and use with pleasure. Nothing that I might be ashamed of when I shop or that I unpack without any pleasure.

In the beginning, the question was whether the condom should be made of graphene. But that is a very expensive material. Since LELO likes to use things that are already in existence, we came up with the hexagon structure, which offers extreme thinness with maximum stability. This structure can be found in nature, in honeycombs, in spider webs, in airplane wings. The hexagonal structure allows a high elasticity.

The condom as a whole consists of 365 hexagons, which lie on the inside, so that they really cling to the skin, so that they really stick and do not slip. Also looks great, but that has nothing to do with style. Of course, this condom is also completely safe, that’s obvious, but can be produced much thinner due to the hexagon structure.

VENUS: How are the HEX condoms distributed?

Svenja Schön: Unfortunately, you can’t buy our condoms in normal drugstores in Germany yet. So far the HEX condoms are available in selected sex shops, at some online retailers and on our website. In other countries, this is already different. In Eastern Europe, we have the drugstore chain Müller as a partner.

LELOs F1S: Sweden’s entry into the market with sex toys for men

VENUS: But this year’s presence at the fair is all about your entry into the market with men’s toys, an area that has been identified in the industry as a potential growth market. In the third section of your booth you are showing a movie about the new product. What is it and how did you start working on it?
Svenja Schön: Compared to the range of products for women, there is not yet a lot of choice for men in the sex toy market. Especially in the high-end segment. There are cock rings, fleshlights and many variations. But we have noticed that men have contacted us who say: Man, you have prostate stimulators and cockrings, but a cool, sexy, full-blown men’s toy from LELO would be really nice. Then, of course, we had some thoughts about that.

The new toy is called the F1S and is a masturbator that will be delivered in January 2019. On the outside, it will have an aluminum housing. Inside of course you will find hospital grade silicone. The masturbator is offered in two versions, one with a window and one without. Of course, I can regulate the strength of the masturbator. There are two possibilities of regulation. Inside the toy, there are a total of ten additional sensors. So there are actually two motors. One is the normal one as with other masturbators, and the other is the one with the sensors. The further I penetrate into the toy, the more sensors are activated and the stronger the vibration becomes. So the intensity of the stimulation depends on how deep you penetrate.

In addition to the toy, there will be an app that offers different functionalities. On the one hand, there is a training mode. It measures everything you can think of. That’s why we also advertise with the racing car at the fair. You measure what you do, you compare yourself. For example, the app measures how deeply I’ve penetrated, what the diameter was like.

VENUS: So we are talking about the gamification of masturbation so to speak?
Svenja Schön: Exactly. It gets even wilder. In theory, I can collect and compare all my data in the app, how was my performance when I first used it? How does my performance change? It even goes so far that if someone asks themselves: Mmmh, not bad, but maybe I’m doing something wrong? The app will show you whether you should rather push to the left or right, a little deeper or something similar. So I can train with the help of the app. But I can also pair the F1S with Bluetooth and my VR glasses, start a video game and use the toy as a joystick.There will also be a developer kit, so whoever wants to play around with it can develop their own app. So the toy is compatible with VR and AR technologies. So I can completely immerse myself in a self-created world.
VENUS: Do you have any plans to further develop the toy through cooperation with other manufacturers or studios or in the webcam segment?
Svenja Schön: That would work, but is not planned at the moment. We’ve only just received the first samples of the F1S at the fair. So you can pre-order it now and the F1S will be available in January.
VENUS: If you say that the app collects data from the device, some alarm bells go off. If you think about the complaint against the manufacturer We-Vibe, whose app sent data about the use of the sex toy to the company. There were huge legal problems and a costly lawsuit. What approach do you take to data security and privacy?
Svenja Schön: The fact is that LELO really doesn’t collect any data itself. Only the user has the data on his mobile phone. But you can find out more from the head developer who is standing next to us right now. I pass you on to him.
VENUS: Thank you very much for the interview, Svenja Schön.
Next week, read part 2 of the big LELO interview. We talk to the developer of the F1S.
If you would like to find out more about LELO’s sex toy line for women, we recommend the interview from 2017.