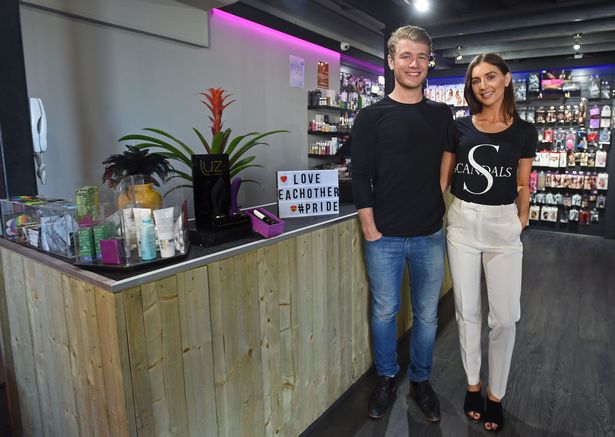 Emilia Bona reports for Liverpool Echo: »Awkward encounters with the in-laws are a rite of passage – but what’s it like to sell vibrators alongside your future father-in-law? Catherine Kershaw, 27, and Ben Hughes, 24, work at Scandals in Bootle , an adults-only shop that is very firmly a family affair.

The stunning young couple have made it their mission to spice up Scousers’ sex lives – but they joked their own bedroom activities aren’t quite as adventurous as you’d expect.

Selling sex toys alongside your other half is bound to bring up questions about your own adventures – and the pair said they are constantly asked about their sex life.

Catherine said: “It’s non existent! When you run a business you have no time for it!

“It’s like if you worked in Greggs the last thing you would want to do when you get home is eat a sausage roll.”

Ben said: “We’re too busy focusing on everyone else to think about ourselves… but we do dabble.“

After meeting at university in Liverpool, the gorgeous couple are getting married in southern Italy this month – and their wedding speeches will leave little to the imagination.

Selling sexy DVDs with his future in-laws has certainly proven to be a bonding exercise for Ben, who has been welcomed in to the adult store empire that is Catherine’s family business.

Ben, who is originally from Warrington, said: “Selling alongside your future mother-in-law is one thing.

“With your dad especially, we were booking on DVDs and he was shouting out some of the titles and I was like… okay this is good. I’m in the family now.

Catherine’s nan even makes regular appearances at the shop, coming in to pass her feather duster over the bondage ropes and erection enhancers that adorn the shelves.

Describing her nan as “one of the first employees of Scandals”, Catherine said: “Sometimes we are really lucky because my nan comes and cleans.

“She usually comes here with her feather duster and provides entertainment for the customers. They lap it up.

“She’s in her 70s but when you meet her she’s amazing. She’s such a modern woman.“

Catherine and Ben are incredibly passionate about making sure Scousers are having the best sex of their lives.

PhD student Catherine said: “I think in today’s world, life is hard enough. There’s so much misery in the world and to have bad sex on top of it is no way to live.”

Ben said: “We like to go to Amsterdam and the views over there the way they’re so relaxed about whatever vices it is.

“They’re so relaxed, especially with adult shops – it’s so out in the open.

“You see so many people in here with healthier relationships, so many very very happy couples.

“So many people are very British about it, but they lay it out on the table and everything else will follow suit.”

Catherine added: “And sometimes it’s more vanilla stuff! We’re not just here for hardcore things – what me and Ben are pretty much into! We’re pretty vanilla people.”

With online sales dominating the adult industry, Catherine and Ben are adamant they provide a personal, intimate service their customers could never get on the internet.

Customers have even told Catherine and Ben they are like therapists, talking them through what they want and enjoy in the bedroom.

Catherine said: “Sometimes people say to you you’re like a therapist but I think sometimes it’s quite selfish because we get so much more out of it.

Ben added: “The people you get in here are just so happy. They’re very vunerable – they trust you a lot when they come in. You make them feel comfortable and warm and then they’re happy.”

The couple’s welcoming approach to selling sex toys is obvious from the moment you step through the door. Catherine and Ben will tie the knot later this month – but not one of their bondage knots, as Ben was quick to point out.«