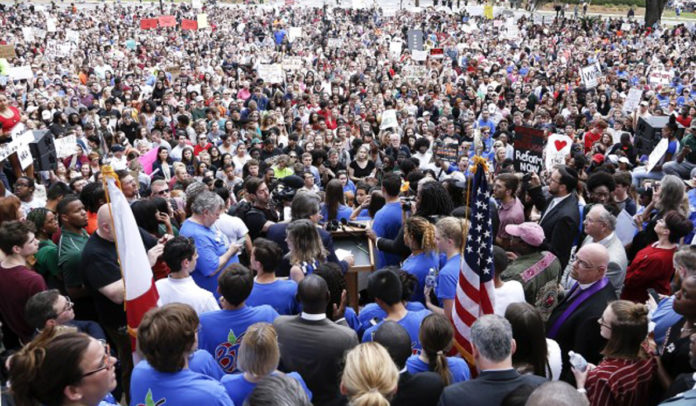 Declaring pornography a public health crisis is largely symbolic. In case of Kentucky, the text of the legislation says that the from now on the state would »recognize pornography as a public health crisis, acknowledge the need for education on the harmful effects of pornography, encourage prosecution of obscenity and exploitation offenses, and commend law enforcement efforts to fight Internet crimes against children.«

Aside from the social stigma legislations and resolutions like that might bring to an already stigmatized community of people working in adult entertainment, there are troublesome signs in these kinds of efforts that hint towards an agenda to circumvent the iron tight free speech protections in the U.S.

The part in the legislation that announces the encouragement of the »prosecution of obscenity …. offenses« is the most telling and dangerous one. Not only is this idea tied to a problematic past where the state tried to regulate the sexual life of adults but the enforcement of the quite vague obscenity laws largely invite arbitrary decisions and legal uncertainty for many production companies. The inclusion of »obscenity laws« make it obvious that Republican lawmakers want to use the public health argument to finish where they have failed in courts all over the U.S. many times as the right to free speech always trumped any breach of the unclear obscenity laws.

Additionally the intended criminalization of a product consumed and enjoyed by practically everyone seems to be the main goal as the legislation connects obscenity offenses with real criminal acts like exploitation and human trafficking.

This means that Republicans under Trump might try to keep his promise to evangelical voters to go after pornography. If true these resolutions might only be the first step.

The Free Speech Coalition (F.S.C.) is therefore concerned about Florida’s planned resolution. Eric Paul Leue, Executive Director of the FSC, said in a statement that »health policy based in outdated morality isn’t just bad for the adult industry, it’s bad for public health.« He is convinced that resolutions like the one in Florida are not only »not grounded in fact« but also nothing but »a pretext to get around First Amendment restrictions on adult entertainment.«

He added: »No reputable, science-based public health organization has labeled pornography a public health crisis. Not the U.S. Department of Health and Human Services, the U.S. Centers for Disease Control and Prevention, the National Institutes of Health, the American Medical Association, the American Academy of Pediatrics, or any state health department.«

Lawrence Walters, an industry lawyer, said that resolutions like that are »a waste of time and taxpayer money. We have serious issues in Florida like school shootings, healthcare fraud and corruption. But adult entertainment is an easy political football that can be used when all else fails.«

He is also concerned about the general tone and language of the resolutions: »I suspect this resolution will amount to nothing during the 2018 legislative session, but the political winds are shifting. As lawmakers continue to conflate adult media with human trafficking, addiction and prostitution, the industry should take notice.«

It remains to be seen how far this President will go when it comes to the culture war. As his alleged affairs make abundantly clear: Trump seems to be a fan of the performers and products he is trying to put into legal uncertainty.