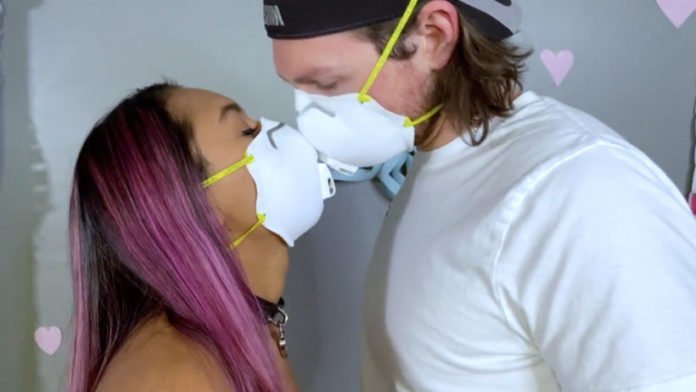 The whole world is talking about the coronavirus. Some people are afraid of the virus, others are more afraid of the panic that comes with it. Cities are closed, fairs and festivals get called off, flights are being canceled. Even the hosting of the Olympic Games without an audience is being considered. Hoarding purchases of hygiene products and shelf-stable food leads to bizarre shortages. The German Minister of the Interior, Horst Seehofer, does not shake hands with anyone anymore, while the President of the USA, Donald J. Trump, is downplaying the danger for fear it might hurt him in the upcoming elections. Often, however, life simply goes on as before, while experts and politicians around the world rack their brains as to how they should deal with the virus appropriately and responsibly.

Bree Mills, star director and Gamma’s creative head of the Adult Time division says: »When you’re looking at a sexual situation where there’s lots of physical contact, there’s a lot of fluid exchange and saliva exchange, so I imagine that would be a great concern. For the most part, we’re in a purgatory state like everybody else.«

In its article, Rolling Stone points out the danger that in the USA, due to a lack of basic social and medical care, performers with symptoms of illness may still turn up for filming, as they simply cannot do without jobs due to their freelance work and are dependent on their paychecks.

The actress Giselle Palmer says: »When you’re working for yourself, you have to put yourself first just to survive. I’ve come into work and my scene partner has looked sick or had a cold sore. It’s definitely not an uncommon occurrence.«

In order to at least provide performers, directors, and studios basic guidelines, the Free Speech Coalition has recently published guidelines on the Corona problem. The guidelines state:

Do not push people to work who have called in sick. We recognize that a change in cast or crew may cause a delay or additional expenses while shooting, but the consequences of people getting sick on set are a much greater risk both in terms of health and finances.

Do not allow anyone who is visibly ill on set. Send talent or crew home – and make this policy clear prior to shooting.

Ensure sets are thoroughly cleaned prior to shooting. This should be standard practice regardless, but be additionally prudent in making sure all surfaces that cast or crew come into contact with have been sanitized.

Film extra content. Try to build a stockpile of content now, understanding that filming could eventually be impacted by the virus.

The FSC is also announcing that it will continue to monitor the situation closely and is in discussions with health authorities in California, Nevada, Florida and New York. Should the situation worsen and become more dangerous for actors, the FSC will impose a production halt until the authorities green light again.

To read the article in Rolling Stone magazine, click here. For more information about the Free Speech Coalition, please visit the association’s website.