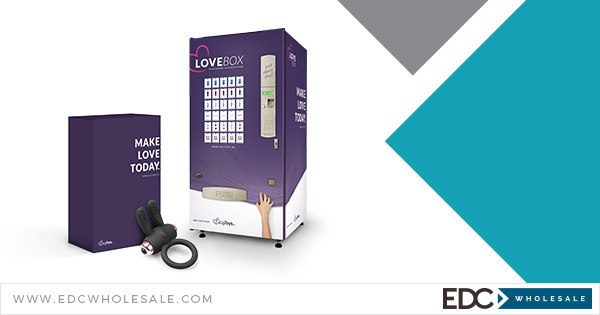 To realize this project, EDC Wholesale is collaborating with one of the largest hotel
and motel chains in the Netherlands. This hotel chain will soon officially announce the collaboration.

An April Fools’ joke that got out of hand

Eric Idema, CEO of EDC: “A while ago we were brainstorming ideas for fun April
Fools’ jokes when someone suggested that we could offer sex toys in vending machines like snacks. Almost immediately we started asking ourselves if that idea could actually be realized. Before I knew it, the first concept design of a vending machine was ready and we were thinking about what kind of toys would fit in those machines.”

A thousand LoveBox vending machines in 2018

In addition to placement in the hotel and motel chain, Idema is in talks with potential
partners about placement in road houses, movie theaters, highway gas stations,
railway stations and airports. Idema expects his company to have placed about a
thousand vending machines at set locations before the end of 2018. There will also
be dozens of machines available for seasonal and temporary placement, for
example at conventions and festivals. “And that is just in the Netherlands and
Germany for now,” he says with a smile.

Varying selection of products per location

The LoveBox selection of products will depend on the location of the vending machine. “We keep track of what sells well at each location and we will change the selection if needed. This is because the wishes of a truck driver at a road house of course differ from the wishes of women visiting a Ladies’ Night at a movie theater,” Idema says.

Within a few weeks of the launch of the vending machines in May, a LoveBox location app will be available for download on iOS and Android. With the app, you can easily find the nearest vending machine, including a list of available products at that particular location.

The first version of the LoveBox vending machines is chiefly focused on the Western European market and supports basic debit and credit cards that are common in the EU. Meanwhile, EDC is researching the possibility of contactless payment with Asian and other international payment systems, such as WeChat, Alipay, Apple Pay and Android Pay.