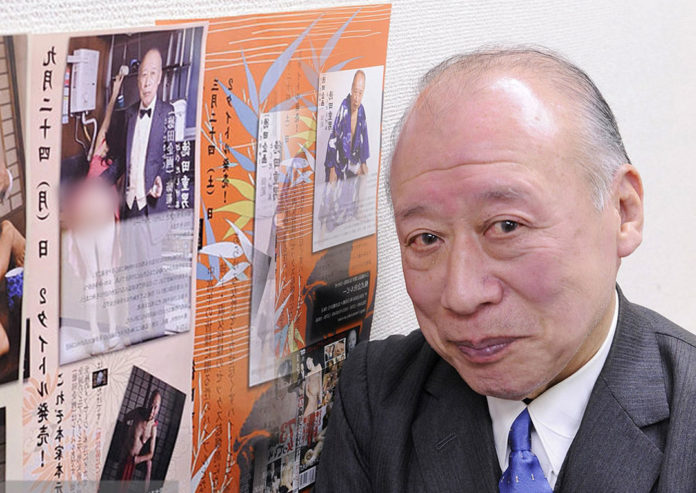 Julian Ryall reports for South China Morning Post: »After making 400 movies for more than 20 years, 82-year-old Shigeo Tokuda knows his way around an adult-movie set and, like more and more of his generation, his career has kept rolling long past even his own expectations.

Elderly people work out with wooden dumbbells in the grounds of a temple in Tokyo to celebrate Japan’s Respect for the Aged Day. Japanese citizens aged 65 or older now represent 27.3 per cent of the nation’s population. Photo: AFP

As of the last Respect for the Aged Day, a national holiday celebrated every September, a record 34.6 million Japanese were 65 or older, accounting for 27.3 per cent of the total population.

Those statistics bode ill for the future of the nation. With fewer babies being born, the Japanese population is expected to fall from 126 million to below 100 million by 2053, meaning there will be fewer taxpaying workers to support a growing number of retirees.

“Half-a-century ago, anyone who reached the age of 60 was very old by Japanese standards, but now reaching your 70s and 80s here really is nothing special,” said Makoto Watanabe, an associate professor of communications and media at Hokkaido Bunkyo University.

“The concept of ageing in Japanese society has become quite different within the space of a generation and instead of effectively being the end of a person’s life, turning 60 today is just seen as a turning point and a chance to transition into a new life.

“These people worked through the years of Japan’s bubble economy and many of them are very wealthy, so they have become a very powerful market that is doing a lot to help drive the economy,” he added.

However, even those with healthy bank balances and hobbies continue to work because they genuinely enjoy their careers. Others have trouble adapting to a life without a job, while another group stay on because younger workers do not have their skills or know-how.

It is not clear which category Tokuda falls into; given that some of the sex videos he has made fall into the “instructional” category, it is possible that it is a combination of all three.

“When I was young, people did not talk about sex because it was socially unacceptable and embarrassing, but I feel now that there is a sense of rebelliousness amongst my generation and we want to go against that.