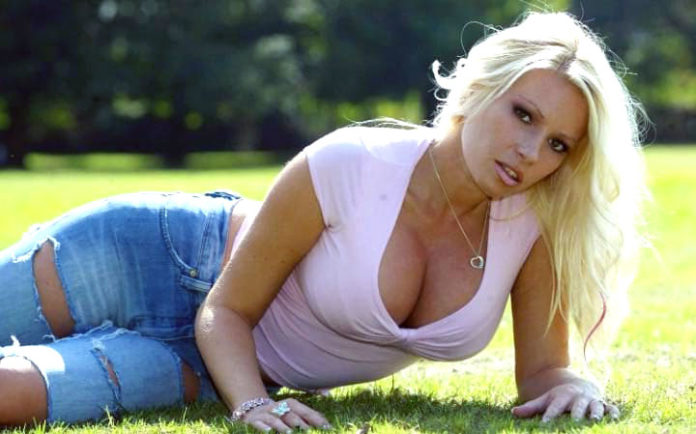 Michelle Thorne, 41, was allegedly over the limit and cops had to throw her in the cells overnight to cool down.

The blonde adult movie star, whose wrestler hubby was jailed in March for attacking her, was having a festive knees up at the boozer when she got in an argument with a relative, it’s understood.

She then got into her white Peugeot people carrier and ploughed into a fence of the pub in Bristol’s Down-end before cops arrived and arrested her.

A source said: “She was very upset and there was a lot of shouting. She was forced to spend the night in the cells to calm down.”

Yesterday damage could still be seen to the white wicker fence outside the popular pub.

Staff had also put traffic cones next to the broken wooden slats to stop drinkers accidentally hurting themselves on it.

A source told The Sun: “She got into a fight and then got into her car and reversed into the fence.

“She then sped off out of the car park and drove round the roundabout and came back before she started arguing again.

“Her dad took her car keys off her then the police arrived and arrested her.

Mum-of-two Michelle, who made it through to the final 60 contestants of X Factor in 2005, last night told The Sun: “I can’t really tell you what happened. What they’re making out I’ve done is silly.

Michelle’s husband was jailed last year for attacking her with a 10-inch knife. Michelle is due to appear in court in January.

Her father Michael Thorne said: “She’s had a terrible year and she’s a vulnerable person.”

A spokesman for Avon and Somerset Police said: “A 41-year-old woman is to appear at Bristol Magistrates Court, charged with drink driving following an incident.