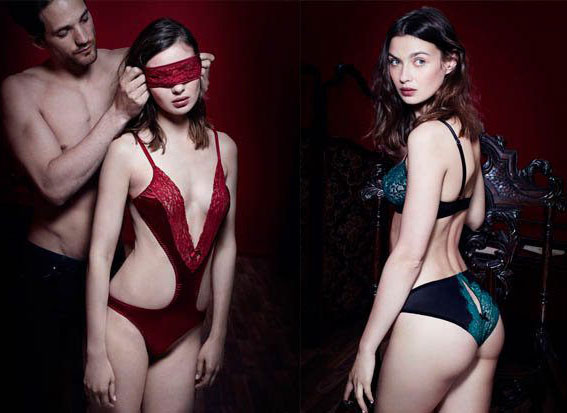 She scoured their shop in London while writing the first book to see what kind of kinky toys Christian might use on her heroine Anastasia Steele.

She says: “I took inspiration from Coco de Mer when I was writing the books and visited the boutique in Covent Garden as part of my research.”

And James worked with Coco de Mer to make sure the sizzling new line perfectly encapsulates Ana’s growing sexuality in the second novel.

The collection is priced between £15 and £60 and features pieces inspired by the books, which document the relationship between innocent Ana and S&M fan Christian.

There’s the Red Room line which is inspired by the billionaire’s famous bondage den and includes a spanking playsuit and halter neck bra.

These are the first official products to be released ahead of the new film, which stars Dakota Johnson, 26, as Ana, and Jamie Dornan, 34, as Christian.

A spokeswoman for Coco de Mer says: “Fifty Shades Darker documents Anastasia’s growth in self-worth which has a knock-on effect on her relationship with Christian.

“She is now more in control – it’s as if the roles have been reversed.

“Ana starts to uncover her underlying sexual desires, becoming more liberated in and out of the bedroom.

“Taking inspiration from the Seattle skyline and the pivotal masquerade ball, the collection focuses on empowering women while celebrating femininity and sophistication.”

While Fifty Shades Darker will not be released until Valentine’s Day next year, excitement for the sequel is building.

An advert for the raunchy drama premiered last week and had a record-breaking 114million views in its first 24 hours.

The original, Fifty Shades Of Grey, is the highest-grossing adult film of all time.

● Check out the lingerie online at coco-de-mer.com.