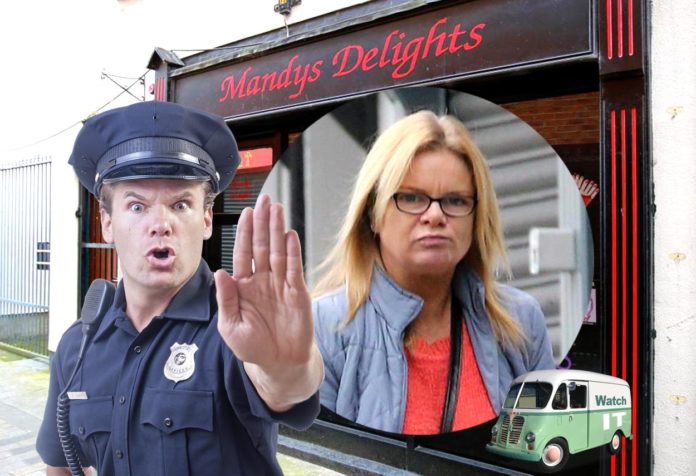 The smutty stash featured titles such as Jasmine and Her Gang, Third Sex Encounters, Apples and Bananas, The Great British Gender Bender #2, Discovering Alexis Texas, Backdoor Emergency Entry, 40 is the new 20, Best of Bisexual and Land of the Shemales.

Twyford, who is on crutches after a road accident, was prosecuted for not having a certificate while supplying video recordings and was fined €400.

Twyford said of her business Mandy’s Delights: “I’m in it for what it’s actually about not for the sleazy side of it.”

And she told how she failed to get a certificate because her father was ill, adding: “I’ve always had one, it was just my father was sick and I was looking at nursing homes.

“You need a DVD licence to sell DVDs. I’ve got one now. It just lapsed.”

Twyford continued: “I’m probably the only shop in Ireland that has a f***ing licence because I know there are some other shops that don’t have licences.”

She also asked: “What paper is this going to be in?” — and when she was told, joked: “I don’t know whether I have the boobs.”

Mandy’s Delights, which flogs a wide range of sex toys for him and her, including bondage gear, is advertised online as providing “the mature approach to adult pleasure”.

Its website states: “We hope you can find everything you need.

“Mandy’s Delights is Irish owned and is focused on providing high-quality service and customer satisfaction — we are very confident on reassuring our customers that confidentiality and discretion is 100 per cent, which enables new and returning customers to feel free to inquire about their own individual needs.