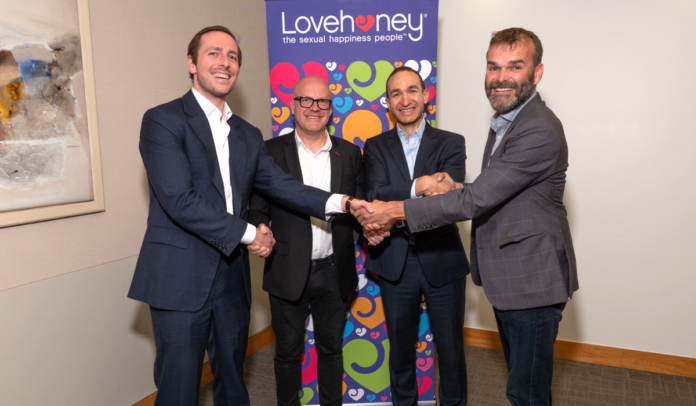 The London based investment company Telemos Capital bought a controlling stake in Lovehoney, one of the hottest and quickest growing brands in adult toys. The founders, Richard Longhurst and Neal Slateford, will continue leading the company with headquarters in Bath.

With its blockbuster licensed toy series around the massively successful »50 Shades of Grey« coming to an end and a plan to further expand the business, Richard Longhurst and Neal Slateford took an undisclosed cash infusion from Telemos Capital in exchange for a controlling stake in their sex toy retailer and maker which they started in 2002.

Lovehoney’s strategy to license big mainstream names like »50 Shades« and pop cultural phenomenon like »Broad City« paid off, the company grew immensely and profited from the seemingly ever-expanding market of sex toys. According to Lovehoney, the investment from Telemos will finance an international expansion »tapping into fragmented and underdeveloped markets and building on its strong consumer engagement.«

While technically available in many markets, the company mainly sells in the UK and the US. The global potential of the brand needed a strong partner. And Telemos Capital is exactly that. The company is part of the Jacobs’ family investment portfolios and run by Philippe Jacobs. He is one of the heirs of a massive fortune created by Klaus J. Jacobs creation and selling of globally active companies (Jacobs Suchard, Adecco etc.).

According to Telemos’ website, the company makes investments between 50 to 200 million Euro. While Lovehoney’s sales grew by 30 percent each year in the past three years, Lovehoney still is a moderate ballpark with a grand total of £100 million last year.

Telemos focusses on companies with a »strong family ownership heritage and empathy«, strives for »partnership approach with management and other owners« and prefers to invest in consumer goods and services, healthcare services and business services.

Jacob Polny is chief investment officer at Telemos. In an interview, he said: »What we liked about Lovehoney was that it was pure-play e-commerce from Day 1. At the same time, the company set out to be female-friendly and focused on couples, away from the seedier end of the spectrum.«

Lovehoney was on the Fast Track 200 list published by the London Sunday Times listing the fastest-growing international companies. The sex toy retailer and maker additionally won the Queen’s Award for Enterprise in 2016 and countless XBIZ and other industry awards.