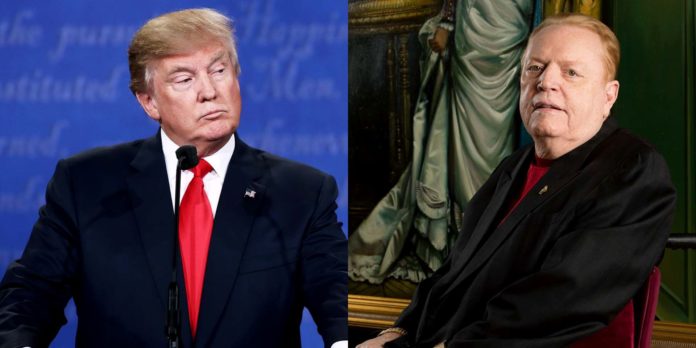 The legendary publisher of Hustler Magazine, Larry Flynt is running a full-page ad in The Washington Post promising a $10 Million reward for information leading to the impeachment of the 45th President of the USA, Donald J. Trump.

The report about the offer to pay for the removal of Trump from the office of the President, made by Larry Flynt, immortalized by Woody Harrelson’s portrayal in Milos Forman’s 1996 movie »The People Vs. Larry Flynt«, came from FOX Business. While Flynt himself didn’t comment he did retweet FOX News report.

The potentially costly ad might just be a hilarious publicity stunt but Flynt is known for sticking to his promises. He makes that perfectly clear in the text of the ad: »Make no mistake: I fully intend to pay this entire sum. Sure, I could use that $10 million to buy luxuries or further my businesses, but what good would that do me in a world devastated by the most powerful moron in history.«

The ad will open in huge fat letters with a clear-cut message: »Larry Flynt and Hustler Magazine announce a cash offer of up to $10 Million for information leading to the impeachment and removal from office of Donald J. Trump.« 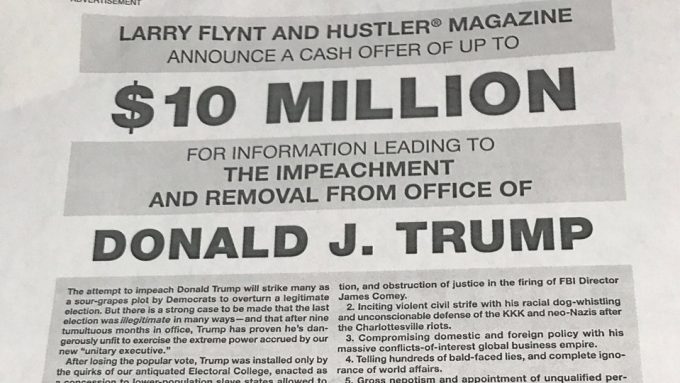 Flynt makes it clear that his motives are not grounded in his political leaning towards the Democrats. Hinting towards the Russian involvement in last year’s election, the firing of FBI Director James Comey, affiliations towards KKK and neo-Nazi groups, and Trump’s generally unusual behavior he writes: »The attempt to impeach Donald Trump will strike many as a sour-grapes plot by Democrats to overturn a legitimate election. But there is a strong case to be made that the last election was illegitimate in many ways and that after nine tumultuous months in office, Trump has proven he’s dangerously unfit to exercise the extreme power accrued by our new ‘unitary executive’.«

Sex, media, and power are always a dangerous mix. So maybe Flynt might be successful. As Trump would say: »Stay tuned.«