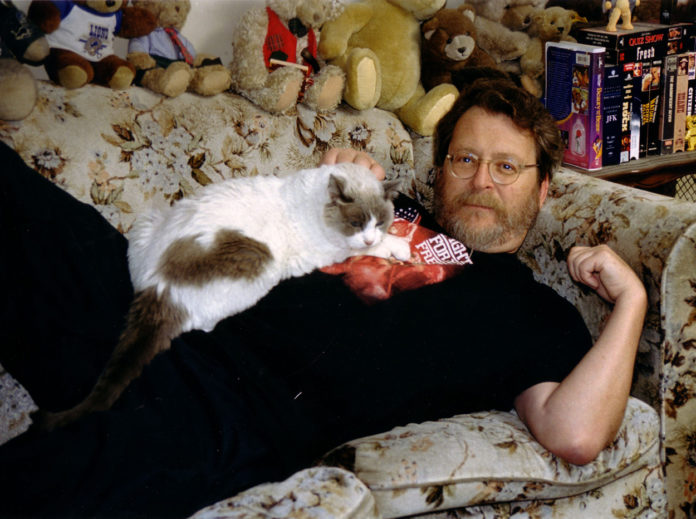 LOS ANGELES—Adult industry legend and AVN Hall of Famer William Margold died Tuesday night during the broadcast of his program on XXXPornStarRadio.com from his Los Angeles apartment. He was 73.

Though few details are yet available about the cause of Margold’s death, close friend Joanne Cachapero told AVN, “It was sudden and apparently he did not suffer.”

News of Margold’s passing spread like wildfire this afternoon around the halls of the AVN Show’s opening day following a post on fellow Golden Age icon Herschel Savage’s Facebook page at around 2:30 p.m. that read, “I am saddened to learn of the passing of Bill Margold. He was doing his radio show last night when he left us. Goodbye for now old friend.”

Getting started as a performer in some of the most celebrated movies of triple-X cinema—including 1978’s Lust at First Bite (aka Dracula Sucks), 1979’s Olympic Fever and 1982’s Pleasure Dome—Margold went on to become the head of trade advocacy group the Free Speech Coalition, as well as either founded or co-founded the X-Rated Critics Organization (XRCO), Fans of X-Rated Entertainment (FOXE) and the PAW Foundation. He also for years hosted his own Legends of Erotica induction ceremony during the AVN Adult Entertainment Expo at Raymond Pistol’s Showgirl Video on Las Vegas Boulevard.

AVN Founder Paul Fishbein reflected on Margold’s unparalleled impact on adult: “Bill Margold was a bit of a renaissance man who spanned almost the entire history of the adult industry. He was an actor, writer, director and an industry spokesman and historian. I respect him most for his PAW foundation, as he worked tirelessly on behalf of industry performers, in particular young girls who were in need of help or mentoring.

“I also served with him on the board of the Free Speech Coalition for almost 10 years,” Fishbein continued. “He was a contrarian and a pain in the ass, but it was all for the common good for First Amendment protection, which he cared about very deeply.”

X-Rated Critics Organization chariman “Dirty Bob” Krotts, who charged Margold with overseeing the Hall of Fame induction portion of the annual XRCO Awards Show for many years, echoed Fishbein’s comments, offering, “Bill’s love of the adult industry was often masked by his gruff exterior. Industry history was near the top of his list of important aspects—he was entrenched in tradition. Now Bill is a real Legend of Erotica. He will be missed.”

Veteran adult journalist Jared Rutter, who was closely involved with the XRCO from its early years, commented, “He was really a one-of-a-kind person. He’s going to be missed by a lot of people in a lot of areas.”

Rutter noted that Margold co-founded XRCO with the late Jim Holliday, who long was considered the go-to adult industry historian. Then when Holliday passed away 10 years ago, Margold inherited the mantle.

“He certainly has a legitimate claim to be called an industry historian,” Rutter said. “He was pretty much there from the beginning. He saw many changes happen, many people come and go. I think he’ll be most remembered for his work with talent. He was very fond of talent. He respected them and he helped guide quite a few careers. People like Amber Lynn. I think he was influential with Nina [Hartley] too. I think more than a historian, he was really an active part of history and I think that’s what he will be remembered for.”

Rutter added, “Of course he was very vocal about everything. It’s a shock. I thought he’d just go on forever.”

Born in Washington, D.C., Margold graduated from California State University at Northridge, with a degree in Journalism. He was the son of Nathan Margold, a Harvard Law School graduate who went on to become Solicitor General of the Department of the Interior under President Harry S. Truman. Nathan was also the author of a landmark study commissioned by the NAACP that studied public education for Black Americans.

The Adult Performers Actors Guild (APAG) and Adult Film Crew Local 424 posted this announcement on their joint Facebook page: “It is with extreme sadness and remorse that the officers of the adult performers actors Guild have to announce the passing of adult industry historian, Bill Margold. Bill should always be remembered for the contributions that he gave this industry most importantly by recognizing and appreciating the actors and actresses from the golden era and beyond.”

Hall of Fame actress Brittany Andrews added, “Wow, just heard the news that an old crony has passed away. A Legend among Legends in the Adult Business. Jeesh, I met him when I first got into doing films, over 20 years ago. I hosted a talk show called ‘Talking Blue’ for 9 years, that he participated in quite often. I know over the years, one might say he had a bit of a crass side. However he was always super sweet to me. He very much was an important and integral part of the business, with a loud voice that took action. As a crass bitch myself, I appreciated his demeanor, especially since it was never directed at me LOL I for one, will miss him. RIP Babe.”

Veteran director Luc Wylder posted, “Ok, Bill, William Margold passed away at work, not in a hospital with tube down his throat. This is exactly how he would have wanted it to end. What a performance. CUT! Ok, kill the lights, it’s a wrap.”

Close friend John Douglas posted this remembrance on Facebook: “Years ago I did a cable show about The Industry and met a ton of really cool and amazing people. The guy that really opened the door for us was William Margold. Bill. Poppa Bear. The Legend. We became close friends because we loved to verbally spar. Constantly. For years after the show, we would get together to hang out, go out to dinner and I would taunt him mercilessly. Didn’t matter because Bill was always right (in his mind). To outsiders it must have looked like we were lifelong enemies. But we did that because we loved each other.

“My partner from that show just texted me letting me know he died suddenly and they just found him about an hour ago. I think the shock of the news is starting to set in. I’m numb.

“I could memorialize him for hours with stories from back in the day (and the narcissist that he was, he would love it) and it seems so surreal right now thinking back on that. But maybe some other time. Gotta absorb this first.”

For its part, the Free Speech Coalition issued the following statement:

“The Free Speech Coalition expresses deep sadness at the death of former FSC Director William Margold. Bill was one of the founders of the modern adult industry both as an actor in the Golden Age of film and in his lengthy career as an advocate for the industry and its performers.

“Jeffrey Douglas, FSC Board Chair, remembered Bill’s contributions to the industry and the organization:

“‘Without Bill Margold, the Free Speech Coalition likely would have passed into history in 1995, as had its many predecessors. At that point, interest in the organization had dropped to the point that there were insufficient nominees to fill the Board of Directors, and Bill selected a group to fill the numerous vacancies. His slate, (along with Paul Fishbein, then publisher of AVN) was accepted by acclamation at a general membership meeting in Las Vegas. From that the Free Speech Coalition was reborn.’

“Bill viewed the adult industry, and especially the performing artists, as his family. He was driven by his pursuit of what he believed was in the best interest of talent. Fiercely passionate and happily cantankerous, Bill took pride in plaguing those whom he perceived as his opponents. His gift for epigrams was constantly put to the service of advocating for the ‘Family of X.’

“Bill left the Board of Directors of the Free Speech Coalition in the early 2000s with deep regret. He had a vision for both the trade association and the industry that was uncompromising and zealous.

“Bill knew he was unique and reveled in that position. We bow our heads at his passing.”

During his tenure with Free Speech, Margold inaugurated a unique type of fundraiser for the organization: naked bowling. Each year, beginning in about 1994, he arranged for a bowling alley somewhere in the city to close its doors to the public for one evening and allow adult stars to doff their clothes and bowl, and FSC charged fans for the privilege of watching it all happen. The fan attendees were also able to photograph the stars and buy videotapes and other items they had for sale. In later years, when the bowling alleys refused to allow complete nudity, the event was done in skimpy bikinis.

Adult performer Mr. Marcus shared his own sentiments about Margold, who had an office next to his in Van Nuys for almost 10 years.

Mr. Marcus recalled that he and Margold “used to argue about all kinds of things.”

Mr. Marcus added, “He was a big guy and he had a big heart and I guarantee that’s what he’s going to be remembered for. He spoke his mind, he wasn’t afraid to say shit, but deep down inside that dude had a huge heart.”