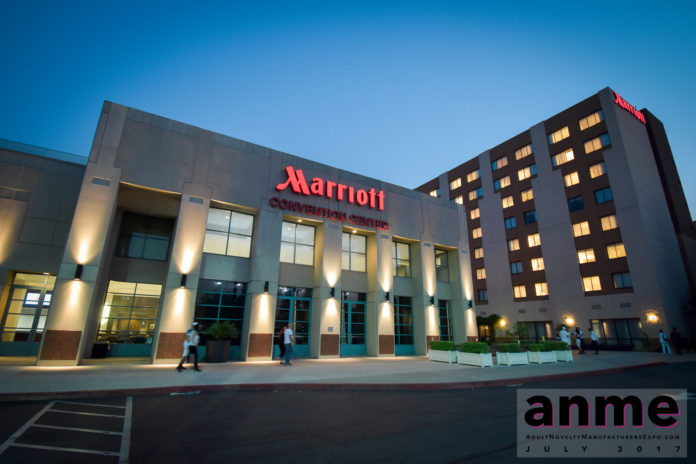 The Adult Novelty Manufacturers Expo (ANME) opened its doors yesterday, January 8. Over the years the 2-days-event has become a stage for many manufacturers to showcase and announce new products. This winter is no different. New product lines and brands were on display by We-Vibe, Lovehoney, Cloud 9, Dame, XR, Creative Conceptions, Lelo and many more.

ANME kicked off its newest rendition yesterday at the Burbank Airport Marriott in California. The trade fair spreads over three exhibition areas with some of the biggest industry players in attendance.

One of the up and coming startups Dame didn’t come with a huge basket of new lines or products. Considering that the much-talked-about company only has two products in total that shouldn’t come as a surprise. But the female-lead sex toy manufacturer did showcase the new version of their bestselling Eva toy, an upgraded Eva II. Co-founder Janet Liebermann said: »It’s a fair amount smaller. The two flexible wings have been given a ridge to ensure a tighter grip and a deeper tuck into the labia. The wings are also shorter. It is now 100 percent waterproof and comes with a charging case. We’ve also optimized the button placement, making it easier to access during sex.«

The publicity-savvy Lovehoney from the UK featured their much-hyped Broad City collection, the BlowYo, Coco de Mer and of course the inevitable Fifty Shades of Grey blockbuster collection. The company is especially proud on a crossover marketing coup in which Emmeline the newest addition to the Coco de Mer collection is prominently featured in the third part of the »50 Shades of Grey« movie series.

Lovehoney’s Kate Hodgson-Egan said: »We wanted to add a little bit of quirkiness to our display. We’ve added a little bit of history to each toy. And we’re especially proud of Emmeline, which was featured in the newest ‘50 Shades of Grey’ movie.«

The Emmeline was named after Emmeline Pankhurst, one of the leading figures in the suffragette movement. The ad for the product reads amusingly as follows: »She’s named as one of Time’s ‘100 Most Important People’ of the 20th century. She has five vibration patterns, multiple intensities, is fully submersible, contains a travel lock feature and is USB rechargeable.«

Lelo’s booth was all about the new Sona toy featured in our interview with Sonja Schön at last year’s VENUS Berlin. She said: »Many people see it and say it’s like the WOMANIZER. Looks similar, but the technique in there is a different one. The Womanizer works with suction. And SONA works by vibration, sound waves, and pulses. You can feel a breeze. It’s basically like during sex when the man breathes through his nose while licking. The device has 8 modes and is waterproof like all LELO-Toys.«

We-Vibe’s marketing manager, Stephanie Keating said: »For 10 years We-Vibe has been connecting couples with innovative products for shared pleasure. The We-Vibe Anniversary Collection is a celebration of our customers’ pursuit of passion.«

At the booth of Screaming O, a new technology is front and center. Some of the most popular products by the manufacturer got a new remote system that can toggle forwards or back through different modes.

Conde Aumann from Screaming O said: »Consumers tend to prefer vibrators with a variety of levels and functions but so often, one accidental touch of a button moves you away from the rhythm that rocks you. What’s great about our new Remote products is that you don’t have to cycle back through every mode in order to find your perfect power level, because you can toggle immediately back to it.«

Lisa Hanna, President of Maia Toys, said: »The Angel has done extremely well with customers so far, and the accompanying display makes it a stand-out item for brick and mortar shops. We’ve put in a lot of effort to improve all aspects of the Maia Toys brand, and we now have customers asking for our products and where they can purchase them.«

New Jersey-based Nasstoys also comes with a huge new product line up: 16 new products are on display. Its newest collection is the Infinitt series debuting with 5 products. It consists of massagers, three suction based, the other two uniquely shaped massagers made of soft silicone.

Kathryn Hartman, Sales and Marketing director at Nasstoys, said: »The new Infinitt Collection is a breath of fresh air. The Infinitt Collection are all unique items that don’t look like more of the same old thing and we are excited for everyone to see this great collection.«

A company called Shots America showcased the first self-lubricating stroker. It is easy to use and comes with a low price range. The stroker’s self-lubricating functionality is water based. Joey Teodoro, a representative for Shots Canada said: »At just $9.99, there’s no way it won’t sell out.«

While other companies focus on new extremes of realistic shapes or functions Hott Products’ unique selling point for the Gold Stroke masturbator is safety. Jaime Raigosa, a representative for Hott Products, said: »We’ve made sure this technology is safe. If the toy notices there is something that is stuck in the sleeve, it will automatically stop itself. It’s soft, efficient and works very well.«

Sex still works best if you can see your partner. Something like that must have been crossing the mind of the chief developer at NS Novelties. The company showcased a glow-in-the-dark-collection called Firefly.

Whatever 2018 will bring to us, one thing seems to be sure: sex-tech companies and pleasure product manufacturers will keep working hard to enrich our sex life or at least give us a nice laugh here and there.