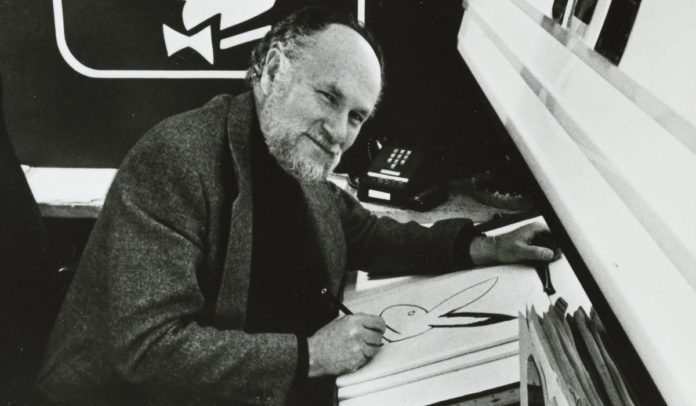 The graphic designer Arthur Paul invented the legendary bunny logo for Hugh Hefner’s iconic Playboy magazine in 1953. Paul died from Pneumonia at 93 in a Chicago hospital.

Arthur (‘Art’) Paul was born in Chicago in 1925. He studied at The School of the Art Institute from 1940-1943. After a brief stint in the army during World War II he continued his studies at the Institute of Design. He became quickly successful and worked as a freelancer when Hugh Hefner approached him with an offer to work for his still to debut magazine.

Paul was initially hesitant. In an interview, he said: »I at first hesitated to accept [Hugh Hefner’s] offer. For as a freelancer I had the best clients one could in Chicago. So I freelanced the first few issues. What convinced me to accept was that I was promised freedom to buy the kind of art most illustrators couldn’t sell in 1953, the personal visions that lay closest to their hearts. I told illustrators I don’t want ‘commercial’ art. I want the kind you do to please yourself when you’re not trying to get work in a magazine. At first, they thought I was kidding. As for fine artists, I convinced them they would not be selling out to work for us but would reach a larger audience with their most authentic work.«

Art Paul was deeply involved in the production of each issue of Playboy magazine for the next 3 decades. During Playboy’s first years in print, Paul became an important figure in the art world as Hefner gave him complete freedom to collaborate with artists and illustrators from all over the world. Among these artists were some of the biggest names in the game: Salvador Dali, Andy Warhol, Leroy Neiman, Shel Silverstein, and Will Elder were all involved at one time or the other with the production of Playboy.

New York magazine’s former design director Robert Newman said: »The idea that Playboy was a sophisticated product, that’s all Art Paul. He’s the one who gave Playboy its up-market, sophisticated and sensual feel.«

Hugh Hefner’ daughter, Christie Hefner, Playboy’s CEO from 1988 to 2009 said: »The magazine is given credit for the sexual revolution. Art deserves the credit for the illustrator’s liberation. He helped redefine the whole notion of commercial art as being able to be as well-regarded and legitimate as high art.«

In an interview with Playboy.com Art Paul talked about his approach: »I set out to change illustration itself by pushing artists and illustrators to be more personal, expressive and innovative. I was guided by Playboy’s spirit of change and the idea that there should be no ‘high’ art or ‘low’ art, that good design could be applied to anything.«

When Paul retired from the magazine he was responsible for winning hundreds of awards for excellence in graphic design for Playboy. His peers still credit his work at Playboy for initiating a revolution in the world of magazine illustration.

After retiring from Playboy Paul continued to work for many magazines and other media companies and served on the board of the Museum of Contemporary Art in Chicago.