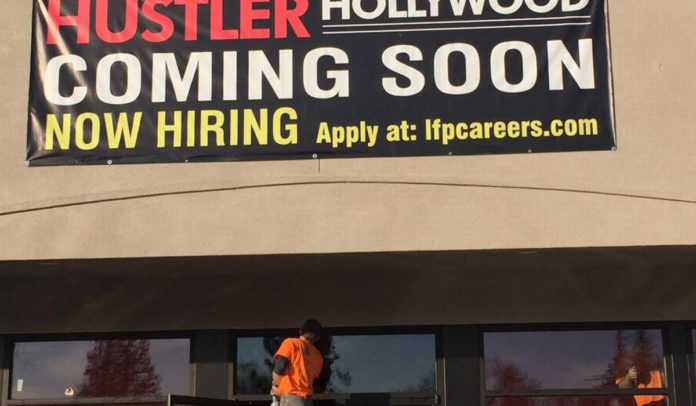 The chain of sex toy stores Hustler Hollywood, a subsidiary of Larry Flynt Publications is opening its 24th location in Sacramento. The store will be located in the southeast of Sacramento on Arden Way, a much frequented street.

According to employment ads posted online the new Hustler Hollywood will open in Februrary 2018. To comply with the city’s laws about 80% of the retail space will feature non-adult products. This will mean a good amount of apparel, lingerie, and souvenirs with the Hustler logo will be covering for the other 20%: adult movies and magazines, explicit sex toys and novelties of all kinds. These products won’t be accessible to minors.

By now the company knows how to bend the rules and obviously found a recipe to keep their stores open. Still many new store openings by the chain had to face opposition and moral outcry by »concerned citizens«. Increased resistance had to be dealt with in Bakersfield, Fresno and San Jose.

In the case of Fresno, Larry Flynt chose to go to court. And if there is one person in the business who is not only not afraid of law suits but actually quite litigious than that person is Larry Flynt, founder of the Hustler brand and a veteran of highly publicized lawsuits concerning obscenity laws and other instances in which government tries to prevent or hinder sex related businesses.

And it should come to no surprise that Fresno finally bowed down to settle the matter. Not only could Flynt open his store but the City of Fresno was also ordered to pay Flynt’s attorney fees of $15,000.

Sacramento will therefore see the opening of Hustler Hollywood’s 24th store early 2018. The company has not released an official opening date though.