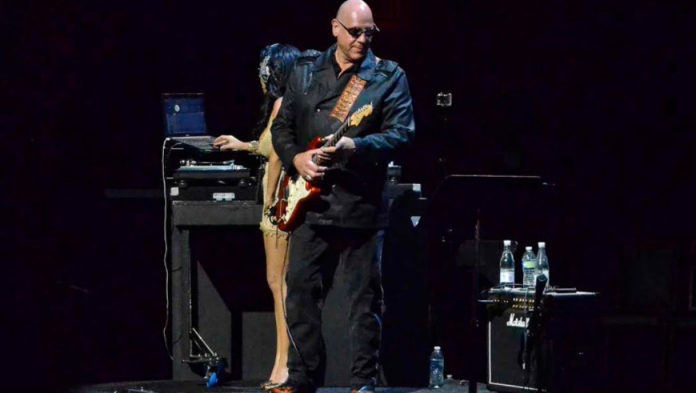 CHATSWORTH, Calif.—Mark Stone, the veteran adult film director and beloved member of the AVN family who was one of the original creative forces behind the AVN Awards Show, died Thursday from liver cancer. He was 61.

Stone, who was diagnosed with stage four of the disease in August, had been in hospice care since Saturday.

Born Mark Miller in Fayetteville, N.C., Stone grew up in Rochester, N.Y., starting his adult industry career in 1982 as a salesman.

He later became one of the three originators of the AVN Awards Show, which will hold its 34th annual ceremony on January 21 in Las Vegas. Stone, along with AVN founder Paul Fishbein and Executive Producer Gary Miller, who is Mark’s younger brother, built what began as a corporate event in the 1980s into the entertainment show it is today that has become known around the world as the premier adult industry awards ceremony.

“Mark was a larger than life character and a big part of the birth of the home video adult industry,” Fishbein said Thursday. “He was really talented, was a big part of helping grow the AVN Awards, and was a creative and original voice in an industry that rewards imitators.”

A gifted musician who played electric guitar, Stone was the musical director and producer of the AVN Awards since its inception. He not only worked behind the scenes on the production, he became a signature part of the live show as the charismatic leader of the AVN Orchestra.

“He was my brother and my best friend in the world,” Gary Miller said. “We came to L.A. together to pursue musical careers originally and then wound up in the adult industry.

“He loved being the creative person doing the different productions that he did, but his real passion was the music and he loved doing that show for everybody. He loved putting together the music for it. For him it was never about the money, it was always about doing something great and doing something big that everybody enjoyed.”

In addition to performing live, Stone also wrote, produced and directed the AVN Awards Show musical acts. Two of his recent production numbers included the terrific performance on stage by Tommy Pistol and Alexis Texas at the 2015 AVN Awards; and the outrageous duet by Anikka Albrite and Joanna Angel this past January.

“He was a musician ever since he was 10 years old,” Miller continued. “He was an awesome, amazing guitar player as anyone whose ever been to one of his show’s would attest to. That was in essence who he was. His passion and love was always music.”

An accomplished videographer and director who helmed 100-plus adult films during his 26-year career behind the camera, Stone was a seasoned shooter for Wicked Pictures, directing more than 50 movies for the couples friendly studio dating back to 1995.

He shot 12 volumes of Wicked’s Hook-ups series from 2002-06 and six editions of Reform School Girls from 2006-10. His most recent title that hit the streets in April was the all-girl Bad Girls Boot Camp.

Longtime Wicked Pictures publicist Daniel Metcalf, who owns Roads to Moscow PR, told AVN, “I have so many great memories of Mark Stone.”
“He was gregarious, loved this industry and really, really loved rock & roll,” Metcalf said. “We logged some time on the road together in 2001 when Wicked Pictures sponsored Spring Break in Panama City Beach. I remember those travels so vividly. We spent hours talking about everything from vintage guitars to the Cold War. He was a huge history buff and quite knowledgeable. I miss him already. It doesn’t seem real that he’s gone. My thoughts are with his friends and family.”
Stone in the ’90s co-owned the gonzo studio Moonlight Entertainment, producing and directing more than 40 titles, including nine volumes of Radical Affairs from ’92-95 and five volumes of Sex Trek from ’90-95.
Rick Davis, the veteran adult director, said his bond with Stone went back three decades.
“Gary and his brother are my closest friends in this business since 1986 when I met Mark,” Davis told AVN. “I’m absolutely devastated over Mark’s passing but my comfort is in the 30 years that we were like family and I was by his bedside for the past three days until the end. Now he is at peace.” As news of Stone’s passing began to circulate Thursday evening, tributes came from all over. Performer Seth Gamble tweeted that Stone picked him up during a period he was down.
“Mark Stone let me live in his pool house during a low point of mine. I will be forever grateful. RIP, it’s a sad day,” Gamble said.

Performer/agent Eric Masterson tweeted his condolences, noting Stone “was always a pleasure to be around.”

On the GoFundMe page that was set up to help Stone with his medical expenses, his 23-year-old niece Lia shared what her uncle meant to her.

“My Uncle Mark has always been filled with compassion and kindness towards others, including his beloved dogs,” Lia wrote. “When I was a little girl, I always remembered feeling so proud that he was my Uncle. All of my friends would always come over when he was visiting so they could play with him. There was just something about him that was infectious—he brought out the best in everyone around him.

“When it comes to his family, he always loved to make everyone laugh and to entertain them with his music. I will always treasure the memories that I have of all of us at family gatherings, and him playing Frank Sinatra on the guitar. The family loved it—especially his mom (Baba) and Aunt Sant. Never in a million years did I think that something so terrible could happen to someone so wonderful.”

Miller said the family was grateful for the outpouring of support after the fundraiser was posted.

“It was unbelievable how so many people went to the GoFundMe page and sent him and me well wishes. He really appreciated it and so did I,” Miller said. “It was nice to see he had so many people in the industry that really cared about him.”