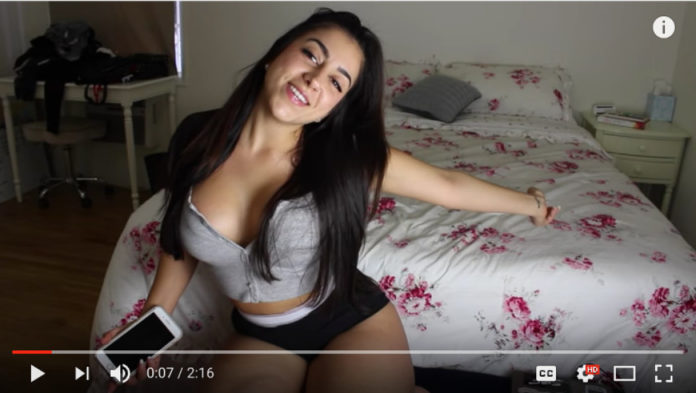 LOS ANGELES—What started out as a silly idea for Lena Nersesian turned into overnight fame and now being recognized on Melrose Avenue comes with the territory.

“It definitely happens a lot more,” says Nersesian, the 25-year-old YouTube personality who went viral in January after promising to do a sex tape with her boyfriend if they both reached one million subscribers. “People want to take pictures. They’re mostly friendly and really curious.”

The curvaceous native of Glendale, Calif., better known as “Lena the Plug,” made the pledge in a 2-minute, 16-second YouTube video titled “$EXTAPE AT 1 MILL” on January 17th. That video at press time had more than 8.9 million views, while Nersasian this week surpassed 757,000 YouTube subscribers. Her boyfriend Adam22’s channel, No Jumper, now has more than 518,000. She’s on pace to reach the one-million mark well before the end of the year and intends to follow through if they both hit the milestone.

Adam22, who hosts the “No Jumper” podcast, also runs the popular BMX website TheComeUp.com as well as owns a BMX clothing line and retail store called On Some Shit.

Lena enjoyed some notoriety before the “$EXTAPE” video. The Armenian beauty already had been charging for access to her premium Snapchat account, where she posts plenty of naughty footage, through the website LenasPlugs.com.

“I have nudes on the internet, people have seen things. It’s not like I’ve been shy about it,” Lena says.

“It was just like a funny idea that really went crazy. Not to say we wouldn’t take it seriously. We would actually do it. I just didn’t know it was going to blow up like that.”

In the first week after she posted the “$EXTAPE” tape video she reeled in more than 60,000 new subscribers, according to the New York Post, one of several national media outlets that noted the YouTube phenom. But she credits the notorious WorldStarHipHop site with launching her into the internet stratosphere.

“WorldStar was what really set it off,” Lena says. “They were the big media source that got everyone else writing about it.”

Her popularity spiraled from there as tens of thousands subscribed to her channel in hopes of soon seeing Lena go hardcore.

“It was a really, really strange feeling, especially because I already have a scandalous line of work where I sell my private Snapchat, which is like some version of a cam girl. For me it’s not this big deal to make this tape, which is why we said we would do it,” Lena continues.

“All these people in 25 different countries are writing from this perspective of me being desperate and how insane I am. It’s hard for me because I’ve always been very well-liked and here is this mass of people—nine million-plus people have seen the video and 95 to 98 percent of them are really hating on me. I’ve always been a friendly person that people have liked. I guess I’m realizing the world is not as open and progressive as I thought.”

“They were one of the first people to reach out. We just didn’t continue the conversation,” Lena reveals. “I still have no interest. With what I do vs. adult acting… What I do is so much easier. Financially, it’s not tempting at all. It doesn’t even come close to the amount of money I make.”

When and if Lena and Adam22 create their sex tape she says they will host it themselves and it would be free of charge.

A 2013 graduate of UC Santa Cruz with a degree in Psychology, Lena says she was going to attend grad school at USC but un-enrolled because it was too expensive and she just wasn’t inspired by it.

Meanwhile she had “tons” of jobs after college. She taught kids with special needs, did babysitting and drove for Lyft and Uber. Then she went to work for a social media tech startup called Arsenic.

“We all kind of wore multiple hats,” she says. “I was reaching out to other influencers on social media and putting them on Arsenic. I had a big social media platform by the time I left there.”

With an already popular public Snapchat where she was posting sexy snaps, she recalls that many of her followers would ask her if she had a private account.

“Basically the opportunity financially became something that was hard to ignore,” Lena says. “I really just wanted freedom with my time. I was tired of killing myself for almost no pay. I really like living a free, comfortable life where I don’t have to work for anyone else.”

Now she makes a good living just off her private Snapchat and YouTube channel.

“This for me is a fun project and a strong source of income and it’s giving extra meaning to my life because I don’t really gain any sort of meaning from the private Snapchats,” says Lena, who picked up her catchy nickname while at Arsenic. “The vlogging is a day in the life of what I’m doing that day. I wake up and start filming. Sometimes it’s not consistent. I still don’t necessarily think it’s good content, but a lot of people tweet at me that ‘we enjoyed watching,’ so I’m trying to be more consistent. It’s something you have to be in the mood for, because you’re on.”

Lena started the channel on Dec. 2, 2016, setting the tone with an introductory video in which she’s wearing only a low-cut top and white panties; she even turns around to give viewers a rear-view tease. The clip has 1.4 million views.

“The plan was to make me a channel a month prior to that,” Lena says. “Adam my boyfriend is a YouTuber. He said you have a great personality, you already have a following, let’s make you a channel. There’s only so much you can do on Instagram. I don’t really feel like I’m that much of a model-type, but I’ve managed to attract people. We thought I had a personality that could do well on YouTube.”

“Karlee and I have been friends for a while and I like to feature different people on my channel. We had been friends prior to this, prior to me having a private Snapchat,” Lena says.

Now Lena says she’d like to make better content, drawing inspiration from many of her female fans.

“It’s really the female commenters making me want to upload a video every day even if it only gets 10,000 views,” she says. “Because they see someone in me they can kind of look up to, that they could be more like, and I’m trying to do that for that reason.”

Her sudden notoriety came as a shock to many, including her family.

“They’re upset with me,” Lena admits. “They’re shocked and surprised. It’s not like they were introduced to my internet life before this. They really had no clue. … I just went from zero to 100.”