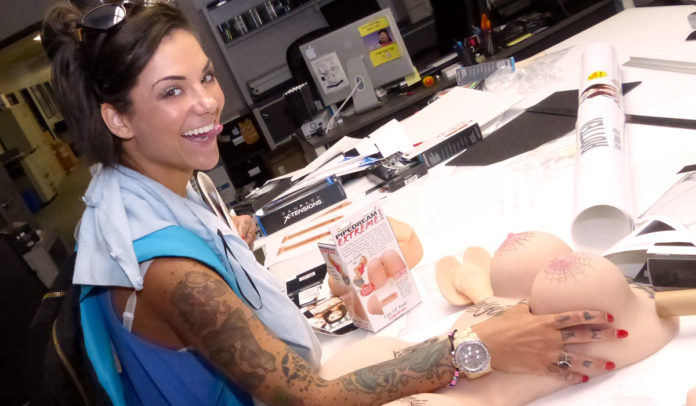 The new CEO of Pipedream, Matthew Matsudaira, comes heavily packed with a range of ideas to get his company and consumers enthused about the Pipedream products.

Several journalists were invited to meet the new management team and the new CEO of Pipedream. Matthew Matsudaira just took over from Pipedream’s long-serving CEO of more than 20 years, Nick Orlandino, who retired a few weeks ago. Matsudaira was keen to talk about his plans and visions for one of the biggest sex toy companies in the US.

Key to his thinking seems to be that he wants to change the culture of the company and to invest in design and marketing. Kristian Broms has been promoted to chief design officer. Nicole Braniff’s Dream Deals program will be expanded. Patrick Lyons, VP of Marketing, said: »She really understands the market. She’ll focus on how we can take a really strong approach to helping retailers and distributors. It’s something that’s pretty unique in the industry.« He added that the launch of the Dream Deals program saw a spike in sales.

Lyons also said that Pipedream will deepen its analysis of the market: »What we’re really trying to do with marketing is get data points, we’re doing a lot of competitive analysis, trend analysis, in the mainstream as well as within this industry. We’re really taking a more scientific approach than we’ve ever done.«

Everybody at the top seems to understand that the main competitor will be Amazon. And the new managing team is determined to counter the e-commerce giant and face it head-on. Lyons openly said: »It’s a killer of brands and it’s something that’s hurt us. We see the counterfeits from China coming in and we’re really looking to control that because that’s detrimental to our business.«

Pipedream will try to attack Amazon with marketing based on research and being closer to customers. Lyons said: »Our goal over the next two years is to be really aggressive. We want to be the Kleenex of adult products.« According to Lyons, this will mean a more hands-on approach to how the Pipedream products are offered online. The company will launch brand pages for individual products for other sellers to embed and thus Pipedream will try to control every information getting to customers. »So it’s our branding, our messaging, our pictures.«

A key component of the new strategy is to slow down the release of new products and make sure that all products are available within 24 hours. Something that in the past apparently didn’t work smoothly.

The new strategy to go aggressively against Amazon comes with deep knowledge of the giant. Pipedream’s new CEO, Matsudaira, worked for Amazon in the past and sees potential to become a disruptive force. At Amazon he worked on products like Fire Phone, Fire TV, Alexa and he was on the founding team of Amazon’s successful Prime Now service. He said that the sex toy market is »ready to experience innovation and disruption.«

He added: »My team is here to grow. They want to learn, they want to be challenged and to stretch themselves. When I talk about my vision here it’s to develop the best team. We have a very capable team that’s going to accomplish great things when given the right tools and framework.«

The new CEO makes it a point to say that he wants a culture of empowerment for his staff. »One of the many things that I learned at big companies like Amazon, Nordstrom and Chewy is being great consistently is hard to do, but when you can get your team to do this magical things will happen. People and companies can often be great during ebbs and flows but we want to be great consistently. We have to practice and sharpen our skills be great. We want to raise the bar.«

While Matsudaira makes it point to say that his team should shine and he himself won’t be trying to get press coverage, he will have a first public appearance in the industry in July. The first ANME Show under his watch will be held in July. The show was the first of its kind when it was founded in 1996 by Matsudaira’s predecessor at Pipedream: Nick Orlandino.