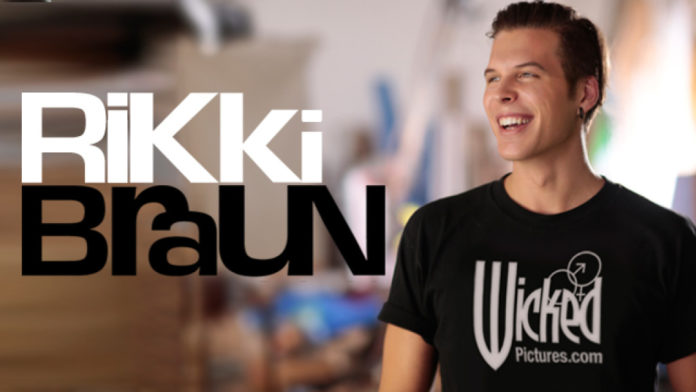 CANOGA PARK, Calif.—Some families have adult moviemaking in their genes. And in an industry first, 24-year-old Rikki Braun, son of Axel, is about to make his debut as the third-generation Braun to call the shots behind a triple-X camera. That directorial bow, a feature entitled Exposed, stars Wicked Pictures contract girl Asa Akira and is due out from the studio in March.

Born and raised in Italy, Rikki made the move five years ago to Los Angeles, where he earned a BFA in Filmmaking from the New York Film Academy. During that time, he became progressively interested in the adult industry and started working with his father, first as a PA, then as a videographer, assistant director and video editor on several projects.

“He’s a very talented kid,” Axel Braun said. “He’s smart, creative and as obsessed with details as I am, and he definitely knows what he wants. I spent the two days of production for Exposed on set with him, and I am very proud of the way he handled it. He was fully in control, he got the performances he needed out of the actors, and the footage looks amazing. Of course we wrapped at 5 a.m. on day two, but he wouldn’t be my son if he didn’t have a 20-hour day on his first movie.”

“There’s definitely a lot of pressure, and two pairs of very big shoes to fill,” Rikki said. “At the same time, I am well aware that most people don’t get the opportunity to direct a feature for the biggest company in the business as their first movie, so of course I am super thankful to Steve Orenstein, my dad, and everybody at Wicked Pictures for allowing me to do that. Having Asa as the lead was simply a dream come true, and although I’ve known her for years and always loved her work, she absolutely exceeded my expectations and turned in a magnificent performance.”

Written by Axel Braun, Exposed is the story of Tanya (Akira), a photojournalist who will stop at nothing to get the perfect shot. Her specialty is breaking into movie set dressing rooms and snapping pictures of stars getting undressed, but when she goes too far she ends up unconvering more than she wished.

“I loved the script,” Akira offered, “so I immediately knew I wanted to do it. I’d been on a few sets where Rikki was helping his father, and it was obvious right away that he had a vast understanding and passion for film; I had a feeling it would only be a matter of time before his directorial debut in the family business. I was so happy to find out I was chosen as the lead. Honestly, though, I would be jealous if he had gone with someone else. Like his father, Rikki is devilishly charming, and also like his father, the shoot lasted no less than 20 hours. It was worth it though, and I would have stayed another 20 to get some of the amazing shots he captured. I can’t wait to see the final product!”

Asked to describe his directorial style, Rikki Braun told AVN, “I like using a saturated color palette, and I like moving the camera as much as possible. My father has taught me the importance of storyboarding, preparation, attention to detail, and having a clear vision of what you want … and especially what you don’t want. I’m still developing my own style, and of course because I’ve been working with my dad for years and because we share very similar filmmaking sensibility I’m sure there are plenty of ‘Axel Braun shots’ in my first movie.”

He continued, “The mainstream directors that I admire are so many … Cuaron, Truffaut, Bertolucci, Carpenter, Kubrick are just a few of the names that come to mind. I think that adult filmmaking should be able to entice, entertain and excite on more levels than just with the pure depiction of a sexual act, and if there’s anything that I aspire to in the future, it’s to try and rise above that. And to not fuck up the family name, of course.”