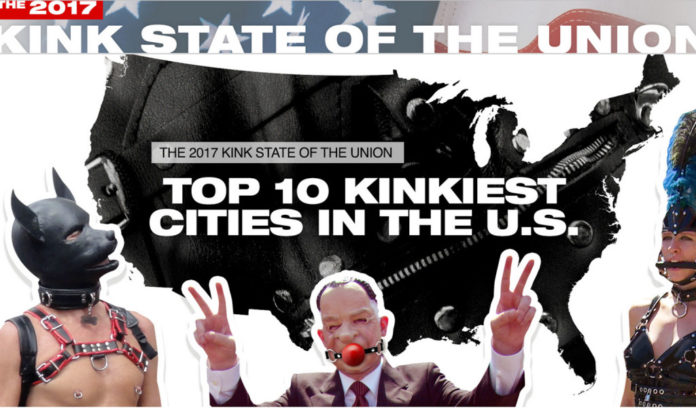 Kink-friendly cities identified in the 2015 report that are missing from the latest list include Philadelphia (previously #9) and Seattle (previously #7), while Las Vegas, #10 in 2015, rose to #6 this year, with Austin taking its place at the bottom of the Top 10.

Perhaps just as surprising, Washington, D.C. dropped from #5 to #8—but we’re guessing that the latest survey was conducted before Pr*sident Trump and his former nude model wife arrived in town.

While nearly all cities in the study showed significant growth in their kink-identified populations (averaging about 40%), Los Angeles’s kink community has more than doubled in the two years since the study was first conducted, growing an astonishing 114%. Los Angeles also now has the greatest number of resources for kink-identified people, with over 500 kink-friendly doctors, lawyers, therapists, play spaces and retailers.

“Los Angeles is quickly becoming the new center of the kink world,” said Mike Stabile, a spokesperson for Kink.com. “LA topped or nearly topped every metric we looked at, while being half the size of other kink centers like New York. And despite the rising housing market, kink-friendly spaces have not been forced out on the same scale they have in cities like San Francisco.”

Portland, which had topped the 2015 list, had the slowest kink growth of any city on the previous list, and slipped to number three this year.

The full report can be found here: 2017 Kinkiest Cities in the United States.