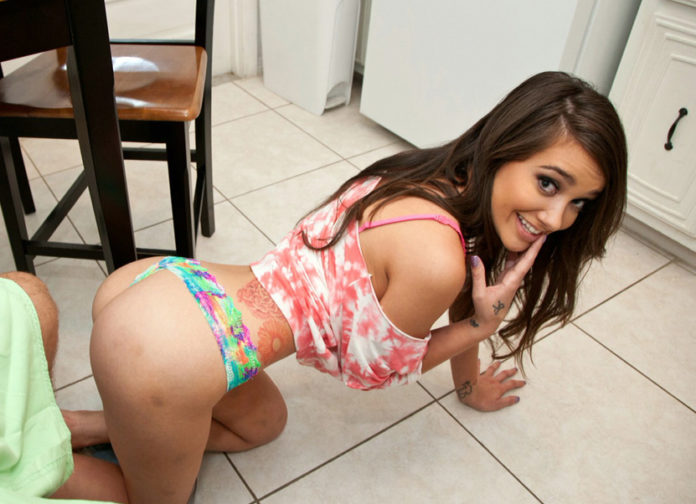 DailyDot Reports: “Billed as “an exploration of the intersection of sex and technology,” Hot Girls Wanted: Turned On has stirred up quite a buzz—but not the type producers had hoped.

The Netflix series, like its documentary-length predecessor 2015’s Hot Girls Wanted, has been championed by feminist outlets like Refinery29 as frank, honest, and daring in its ambition. But controversy hit after camgirls briefly featured in a Periscope montage alleged that HGW:TO had outed them as sex workers without their consent. Additionally, adult actress Gia Paige, who was featured in the series, took to Twitter to complain that producers had promised to cut a segment where they were trying to get her to talk about her family, which made her “uncomfortable,” but it was ultimately left in there.

After days of sex workers and allies venting their frustrations on Twitter, the story was eventually picked up by mainstream outlets. Producers Jill Bauer and Ronna Gradus responded in a Variety exclusive, expressing little remorse and arguing that their actions had been legally justified.

And while the Hot Girls Wanted franchise purports to shed light on the exploitation of sex workers, sex worker advocacy groups have joined the voices of individual performers in calling for Netflix to pull the plug on the series, with much of the critique being leveled specifically at Rasheeda Jones, the actress who’s also a producer on the project.

For instance, high-profile performer Janice Griffith had a lot to say regarding her frustration, in tweets almost exactly a year apart:
“Rashida Jones can suck a big fat dick I’ll hate her forever until she fully apologizes for the atrocity that is Hot Girls Wanted”, “hey @iamrashidajones, do better” and “I would pay money to fight @iamrashidajones”.

Inflammatory though her words may be, Griffith’s anger stems from Hot Girls Wanted’s paradoxical claims of defending sex workers while simultaneously brushing off their legitimate concerns about consent and privacy. Jones herself, whose celebrity status has made her a lightning rod for critique, has been arguably more sensitive to sex worker’s complaints than either Bauer or Gradus; in an interview with Time, she repeated the assertion that the production team had acted legally (while distancing herself from the “legal vetting” of the show), though she empathized with the “shock and frustration” of being a performer whose image had been used without consent or approval.

However, in a recent conversation with the Daily Dot, Paige asserts the use of her image is fundamentally different.

“There are many dangers of having your identity exposed as a sex worker,” the actress explains—dangers that are unique to working in a stigmatized industry. In the fourth episode of HGW:TO, Paige’s legal first and middle name are shown. Within a week of the episode’s release, “someone [figured] out my last name and [did] extensive research on me and all of my family. They’ve been busy sending all of them envelopes filled with photos of me from the industry… Some stranger knows where all of my family is. I can’t put that kind of fear and anxiety into words.”

Whether or not Gradus and Bauer were within their legal rights to use the footage they shot with Paige, the effect of being outed about her personal life has been undeniable—and all the more painful because of her reluctance to get involved in the project in the first place. When the original documentary aired, Paige says, she had “started getting serious with Riley [Reynolds, Paige’s ex-fiance and former agent who was in the documentary]. Other girls in the agency were telling me how embarrassing it was, so I didn’t want to see it. I didn’t want it to change how I felt about Riley.”

So when producers asked Reynolds to get Paige involved in shooting the follow-up series, she was naturally apprehensive. “I refused for several months,” she explains, but her then-boyfriend’s insistence led her to set up a meeting with Bauer to discuss personal boundaries.

“I told her how much I didn’t want to be there, that I didn’t want a lifestyle like him… being noticed everywhere he went.” Hot Girls Wanted had made Reynolds a publicly-known face, and Paige expressed to Bauer “how much anxiety I had about keeping my personal life and my family out of whatever we filmed. She assured me she wouldn’t cross any boundaries.” Paige also claims that Bauer told her the project wouldn’t be called Hot Girls Wanted: “They said they didn’t know what it would be called yet.”

Asked if there were red flags during shooting, Paige describes having her concerns brushed off by Riley and the production team. “Pretty quickly after we started filming, they began asking about my parents and I kindly reminded them I didn’t want to talk about it, but they kept urging.” After repeated incidents where Paige interrupted filming to reiterate her boundaries to the film crew, she ultimately asked Reynolds to have her taken out of the project. “He said he had it taken care of, [and] as my agent I trusted that.”

By the time the episode featuring Reynolds and Paige was released in late April (including footage of Paige’s legal name) the damage was done. Paige took to Twitter to express her frustration, then learned from an online article that Bauer and Gradus were unapologetic about the violation. Their defense—that Paige had signed the forms, that everything had been legal—meant little to Paige.

“I think it’s just their way of saying they don’t really care about what they’ve done or who they’ve hurt,” Paige says, referring both to the release of her personal information and the Periscope performers who were outed by the show. “I think it’s just an excuse to help them sleep at night.”

In the midst of the media frenzy, Paige says she “had a little contact with the other women on Twitter sharing posts and such,” but that she’s mostly “been trying to stay offline.” Whether or not it was legally justified, and whether or not it made for great, critically-acclaimed TV, the use of her story, her image, and her name has had a serious impact on her personal life.

“If I could say one thing to them, I would say… shame on you,” Paige asserts. “Woman to woman, you don’t do that.”

And to her fans and the people in her own life who have seen the docuseries: “I hope you still think of me the same.”