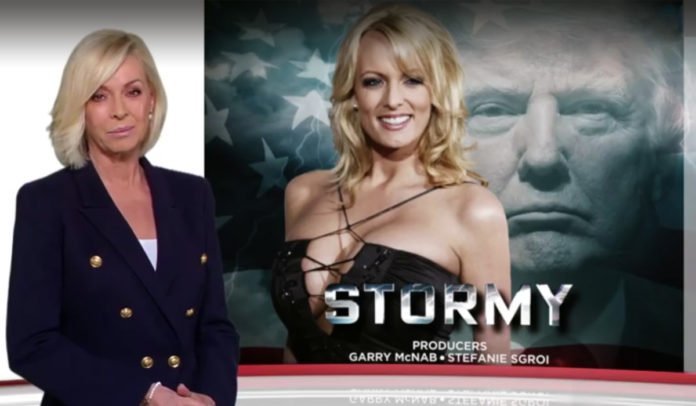 Before Stormy Daniels came to Berlin, she stopped for a short visit in Australia and gave the Australian show »60 Minutes« an interview in which she talked about her alleged affair with Donald J. Trump and her new book »Full Disclosure«.

Never at a loss for a punch line, the actress happily provided information and countered criticism of the credibility of her story by saying that she would certainly have chosen someone »less embarrassing than Donald Trump« if she had only been interested in headlines with an invented affair.

In the meantime, there is hardly any doubt about the accuracy of her story. After all, embarrassing details have long since become known about Trump’s hush-money payment, which has put his lawyer Michael Cohen in serious legal trouble.

Stormy Daniels’ biography »Full Disclosure« has been on the market for a few days. In the book, the actress talks about her career, her fathers, her two breasts, which she calls »Thunder« and »Lightning«, and describes Trump’s genitalia throughout five paragraphs. His penis reminds her the most of the »Mushroom in Mario Kart«. She said that she describes the president’s penis so accurately, even if it’s body shaming, to make it clear she’s not lying. She is far from trying to humiliate Trump, but the truth according to Stormy Daniels has to be revealed.

In the interview, she says that she was a little bit conflicted about the book. She didn’t want to hurt him but she felt the need to be precise so that people stop hurting her.

Here is the interview in full length: