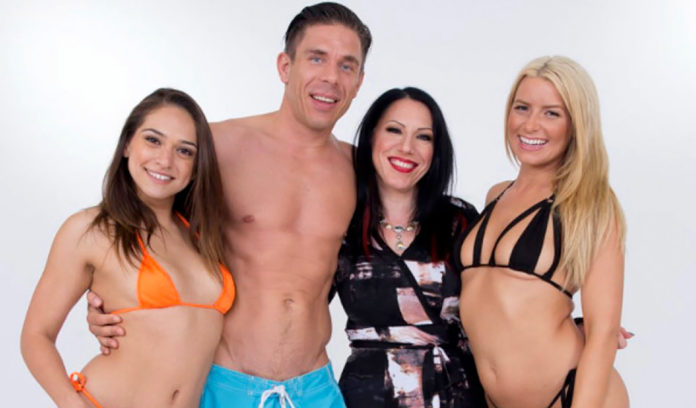 “When Adam & Eve expressed an interest in a new Baumgartner project, I was thrilled. I’m excited that Kay Brandt is directing again, of course, she did an amazing job with Babysitting the Baumgartners,” Kitt said. “This project is more of a collaboration than an adaptation, since both the book and movie will be released together. It’s been fun and challenging to work out all the kinks, so to speak, but I think fans are going to be blown away by these brand new Adventures with the Baumgartners.”

The movie trailer is set for release in January, with the full-feature movie releasing May 2017.

“Babysitting the Baumgartners was an incredible opportunity to direct a film of its size and scope. Bringing this new book to film—a book that hasn’t been published yet—was a wonderful challenge that the cast and crew embraced in every way,” said Brandt. “I feel very fortunate to have been surrounded by a gifted group of people who gave of themselves completely in making this film a thing of beauty.”

The new movie brings back brings back Mick Blue and Anikka Albrite as the sexy couple, along with the Baumgartners’ luscious teen babysitter Ronnie portrayed by Sara Luvv and their’ sexy friend Gretchen, played by AJ Applegate, while introducing a new set of sensual characters: Daphne, portrayed by Edyn Blair; and Paige, portrayed by Katy Kiss.

“It’s a huge honor that Adam & Eve chose me for such an important role. I love playing Mrs. Baumgartner,” said Annika Albright. “She is a loving supportive wife who also has an insatiable sex drive and loves to seduce other women and share them with her husband. In this second Baumgartner movie, I spent a lot of time with my good friend Daphne, who is played by Edyn Blair. Daphne and I are like best friends who also love each other and I share her with my husband Mr. Baumgartner, as well as have a hit foursome with my husband, Daphne, and her husband, who is played by Derrick Pierce. I like to think of Mrs. Baumgartner as a future version of myself. She is really fun to play and I feel very naughty!”

Mick Blue, who played Doc Baumgartner, agreed, saying: “Shooting Adventures with the Braumgartners was wonderful. It was really great to reunite the whole team again and create something even more special than the first time,” he said. “Playing the Baumgartners with my amazing wife Anikka mirrors our possible future life. The role is a perfect fit for us, especially Anikka, who was once again outstanding with her acting abilities. I am super honored to be a part of this wonderful film.”

Luvv, who played the nubile Ronnie, added: “I’m really happy that a second Baumgartner movie was made. I had so much fun during the first one and I had more confidence going into filming the sequel. I had a greater understanding of my character and I was very comfortable with everyone on set. It was great working with Kay again and seeing how passionate her and the entire crew are about creating great movies. And after the little bit of footage I sneaked peeks of on set, I cannot freaking wait to watch Adventures with the Baumgartners!”

The movie features nine sex scenes including a four-way scene with Ricky Johnson, Katy Kiss, Sara Luvv and AJ Applegate and two other four-way scenes along with two threesomes.