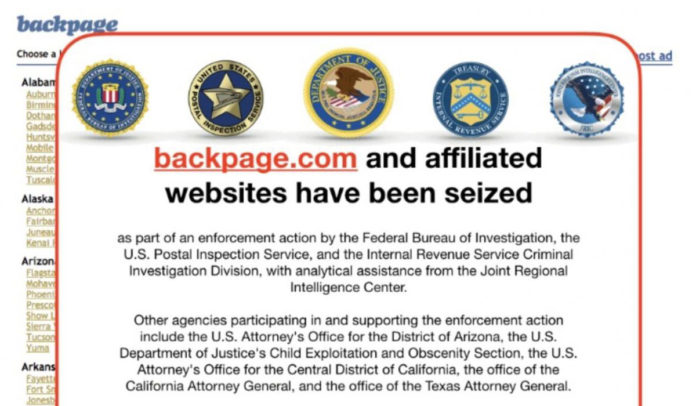 The fallout from the new anti-sex-trafficking laws SESTA and FOSTA continues. The FBI’s seizure of Backpage.com, a popular service for personals, also used by professional sex workers, proves that the fear within the industry was not exaggerated.

While there still seems to be some uncertainty about what the bill will actually mean and about if and when Trump signed or will sign the law, the FBI moved quickly on Backpage.com, a service used by sex workers to advertise their services. Seven people were indicted on 93 counts of several crimes, including money laundering and facilitation of prostitution. The home of Michael Lacey, founder of Backpage.com, was also raided. The once influential website now only shows the seizure notice by the FBI.

The statement by the FBI greeting visitors reads: “Backpage.com and affiliated websites have been seized as part of an enforcement action by the Federal Bureau of Investigation, the U.S. Postal Inspection Service, and the Internal Revenue Service Criminal Investigation Division, with analytical assistance from the Joint Regional Intelligence Center”.

Backpage.com clashed with law enforcement several times and was one of the reasons why the Communications Decency Act of 1996 was extended. The part which basically granted immunity to website operators as it stated that they couldn’t be legally held responsible for actions of their users was essentially nullified when it comes to sex trafficking investigations.

Next to Craigslist and Reddit, YellowPages.com also banned all escort services and escort related ads. After the closing of CityVibe.com and Nightshift.co, MyScarletBook.com, ProvidingSupport.com, Pounced.org and after the closings of discussion boards on VerifyHim, HungAngels.com and the cancellation of marketing efforts in the US by YourDominatrix.com the seizure of Backpage.com paints a dark picture of what’s to come.

Other adult companies become increasingly nervous. MyFreeCams, a popular cam girl service, changed its terms of service. From now on its forbidden for cam models to meet customers for tokens. FetLife.com banned consensual blackmail and financial domination services from its website.

Most worryingly Microsoft and Google both also changed their policies regarding adult and explicit content. Google Play preemptively also included  “promotional images of sex toys” as forbidden explicit content. Google Drive went so far to even delete explicit content on its cloud service and banned users. Microsoft’s move though might hint towards a somber period in US history. The new terms of service ban the use of “offensive language” and “inappropriate content” on Skype, Xbox, Office and other services. This opens the door to full-fledged censorship and the end of free speech.