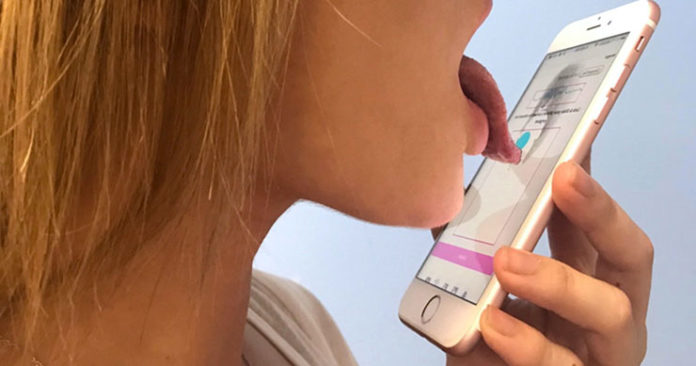 Penelope Tamblyn reports for MENSXP: »We live in a day and age when we don’t have to lift a finger if we don’t want to, unless there’s an app for that, too. From monitoring our sleep cycles to our work schedules—there is an app for everything in this world, today. We rely on these apps for everything—from getting from Point A to Point B, to choosing the person we’d like to date. So, it comes as no surprise that we now have an app that lets us have oral sex—yes, hold your breath—through your iPhone.

You simply lick the screen of your phone and slide the phone the way you want, in order to record the motion. You can set the vibration levels accordingly, from high to low. And in case you think using your tongue to lick your phone screen is just too bizarre, you can use your finger too. “You can also use your finger, but telling people to lick the phone helps the click bait. If your phone screen is clean, you should be OK,” said a CamSoda spokesperson to Huffpost.

According to research conducted on the App by Press, the technology of the app has been tested on models working at CamSoda, an adult entertainment website that also owns the app, The O-Cast. According to Press, “They (the cam models) gravitated towards the higher vibrations. I didn’t think they’d want a product that vibrates so aggressively. When I hold it, I can feel the vibes down my forearm.” One of the models, Charley Hart said about the app, “I loved it. Nothing is like the real thing, but it’s great when the other person is far away. Guys who are good at it are rare, so a guy who is, I’m calling back.” Another model, Caroline Phinney raised an important point through her own experience, stating that, “However, it is slightly scary knowing the person supplying you with that orgasm could be some weird old man in his mom’s basement, because I am convinced they are the kind of people who catch wind of these sorts of apps first.”

You could say that the app works along the same model as dating apps do. You don’t really know who is on the other side until and unless you see them in the real world. But, for those who are up for a little (read, A LOT) experimentation and have a partner who is controlling the motions, this could actually revolutionise the way people give and experience oral sex.«

30th Eurowebtainment on Mallorca in May 2019

New Smooci App is the Next Generation Escort Directory