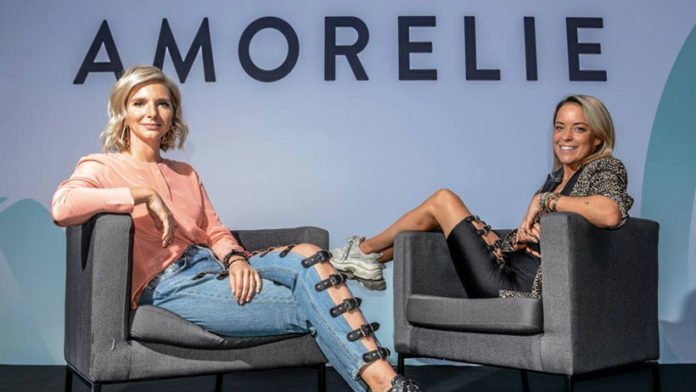 For years, the Christmas calendar by German online retailer Amorelie has been one of the best-selling articles of the Berlin-based company. This year its founder Lea-Sophie Cramer persuaded the designer Marina Hoermanseder to design some of the articles.

The 33-year-old Austrian star designer Marina Hoermanseder has designed three accessories for this year’s Advent Calendar by Amorelie. In addition to a bracelet, which can also be used as a collar, there is a small bag and a sleep mask designed with the familiar clasps that characterize Hoermanseder’s design style.

The Austrian has been running her own company since 2014. She became famous for her contemporary reinvention of the corset and for redesigning the uniforms of the Austrian Post as well as those of Austrian Airlines.

The Berliner Morgenpost has conducted an interview with Hoermanseder and the head of Amorelie, Lea-Sophie Cramer. They talk about feminism, friendship and sex.

Cramer raves about the partnership. »Well, we have applied to her with a video in which we told her how great we think she is. At the first meeting, it immediately clicked. We have a very similar standard in terms of quality and design.«

A relaxed approach to sex toys

Hoermanseder showed no reservations about becoming active for an adult company. She says: »Concerning these matters, I am very relaxed in my private and professional life. Fashion designers also have sex – when they have time. I still admire Lea for how she can say some words without blushing. I think that’s hard training.«

Cramer then admits that she always started blushing in the beginning. But over the years, of course, when running a sex shop, you can’t help but become a little more relaxed when dealing with the most natural thing in the world: »Now it’s my everyday life. And I don’t have to talk about what I use privately. But it’s great that there are things that are fun exploring together.«

In the course of the conversation, the star designer reveals that she had not experimented with sex toys before working with Amorelie. But now she has tried a few of them and seems enthusiastic. Her favorite toy? »The Womanizer. It just works. According to statistics, over 90 percent of all women reach orgasm within five minutes. You can only scream ‘Yoo-hoo’.«

The Amorelie Advents calendar appears in three varieties, one for men, one for couples and one for women. Hoermanseder stresses that sex toys for women always have a feminist aspect to them. »What I sometimes find difficult is that feminism seems to neglect the feminine. We are feminine, sexy feminists.«

Cramer and Hoermanseder have become friends during cooperation. That’s why they both expressed their admiration for each other during the interview. Hoermanseder says about the Amorelie founder: »I don’t know if I could do all this as Lea did with two children. I find that incredibly admirable. She’s at the company until midnight and brings her son to kindergarten at seven in the morning and makes an instastory of how happy she is after four hours of sleep. That’s women’s power for me.«

You can find Amorelie’s website here. The website of the label of Marina Hoermanseder can be reached via this link. The interview in German can be accessed in full by clicking here.