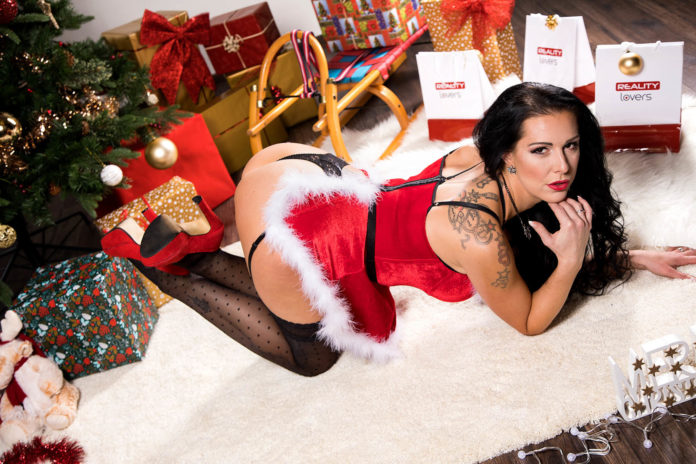 In addition to showing intimate insights, she also reveals secrets in an exclusive interview with Reality Lovers: it is obvious that she enjoys her job.

What makes it so exciting for you?

I love having sex! And in my acting career, I get to live it out. I can do whatever excites me and gives me pleasure. And on top of that, I get paid for it. Besides, I am a cheerful and open-minded person by nature. It’s exactly this attitude that I try to show in every film I make.

Do you have any role models?

There are many people that inspire me. Both in my private life and in the industry. I always try to give 100 percent and always try to present myself in a way so that others might take me as a role model as well. I don’t know if this is a good role model: But the »American Dream« and the Rockabilly mentality have always fascinated me. That is also the reason why I chose my stage name.

What are your goals?

I have already made some movies and always had a lot of fun. And one of my biggest dreams is already happening: I’m quite often in the USA for several film productions and recently I was nominated for three AVN Awards! I work hard every day both on social media and during every production. Another goal that I have is to shoot as much as possible in VR. The opportunities are simply awesome and will get even more exciting in the future!

How was it for you to make a movie in VR?

It was totally exciting and fascinating! It’s really great fun and is really something else. I am constantly learning about the diversity of sex and the ways to enjoy it. For me as a performer, it was also a challenge: because in VR, all the attention and every movement must be focused on the camera. This is the only way for users to get the feeling of actually having sex with me later on. And this idea turns me on extraordinarily.

Have you already received feedback on your VR film?

Yes, from fans as well as from friends. And it was nearly always positive. Anyone can have sex with me now. Glasses on and off you go! Great, isn’t it?
Do you think that the sex of the future will be exclusively virtual?

I don’t think so, no matter what. It will be more diverse, more colourful and more exciting. The possibilities of Virtual Reality will certainly be enriching him. Long-distance relationships are a good example for this: VR and Dildonics help couples to enjoy intimacy despite being far away. I will definitely have as much sex as possible in the future – whether in front of or behind the camera.

You can find more about Texas Patti and a weekly update of new VR videos at http://de.yourvrdream.com/
Click here for the VR video clip starring Texas Patti:
https://realitylovers.at/vd/9793847/Verbreite-die-Liebe

About RealityLovers
RealityLovers got a VENUS Award in the categories “Most Innovative Product 2016″,”Best VR Page 2017” and they got the YNOT Award 2017 as “Best Website”. The company offers adult movies in FullHD for virtual reality. Users can experience the events from the perspective of the performers in a 180-degree perspective and thus actively participate in the lovemaking. Those interested can choose between different subscription offers.