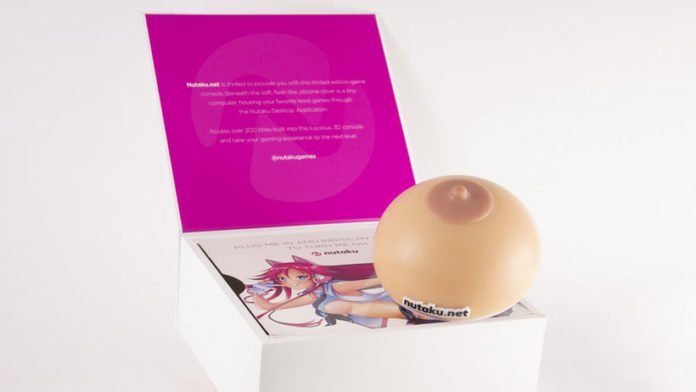 According to Nutaku, their console is the first video game console ever to target the adult entertainment market. 200 free to play and premium titles are available for instant enjoyment via the custom-built Nutaku Desktop App. The video game console’s system is based on the Windows operating system.

Jessica Myers, the designer responsible for the console project at Nutaku, proudly comments: »There’s a lot going on in the game console scene these days. Nintendo is threatening to stop making consoles, and Mad Box is promising to be the most powerful.”There is a lot going on in the console market right now. Nintendo is threatening to exit the console market altogether, and Mad Box could become the most exciting console.«

Myers adds, »We wanted to make something unique and inviting for our 18+ community. Now players can easily plug into any TV or monitor and access their favorite titles.«

With the console’s provocative tits design, the portal is sure to make headlines. After all, the gaming scene, in particular, has also been criticized for its insensitivity against sexism and feminist positions. Nutaku itself only recently tried to position itself as a consciously operating market player by adding LGBTQ-friendly titles to its catalog. It seems somewhat questionable to what extent a game console with a design that clearly shows who the main target group of Nutaku games is would be able to help with this.

The console has a silicone casing and is supposed to resemble a female breast, not only visually, but it should also feel like one. Of course, the nipple itself acts as the on/off switch. The device has an HDMI port, two USB ports and an audio port. The connection to the internet is wireless, countless titles of the Nutaku catalog are pre-installed.

If you want to buy the console, click here. The games offered by the portal can be found here.